A Silky In The Tractor 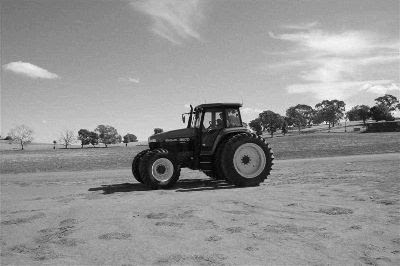 Before we came to “Spring Rock” Graeme had a little, ancient tractor that was sufficient to work our 25 acres, but of course we needed a much larger one for sowing crops. After spending a few weeks carefully choosing just the right tractor Graeme brought his prize possession home. It was huge!! I just know he felt quite chuffed riding around in his monster - very much the real farmer type. Shadow, the little Silky Terrier type, soon saw to that!

I worked full time back then, but arrived on the farm during the Christmas holidays so I was home for six weeks before going off to work. I was company for Shadow who loves to know where everyone is. Graeme too was around the house area a lot. Harvest was over and sowing had yet to begin.

Once I returned to work and Justin started high school, sowing started and the house yard became deserted during the day, Shadow began to feel lonely. If you met Shadow the last thing you’d think is that she’s a sociable little person. Generally she resents visitors and grumps for ages after one has the temerity to say hello to her, but she’s devoted to her family and likes to have them all around her, preferably rubbing her tummy while they’re there. She looked about for any available family member (we’d left Rebecca and Joshua living in Picton so she was permanently down two family members anyway) and came up empty handed. Shadow put her little doggy mind to the problem and came up with the perfect solution. She soon discovered that if she followed the sound of the tractor she'd find Graeme. Now while Graeme was the least satisfactory family member to find, a dog has to take whatever she can get when the entire family disappear on a daily basis.

Shadow was a slip of a girl back then and could both see and hear without difficulty, not to mention all her joints worked perfectly and she could run!! She'd make a beeline for the tractor and run around the paddock beside it, ears flapping in the breeze, tongue hanging out and sheer joy on the fluffy little face. The problem was that Shadow measures about 30cm at her highest point while the stubble measures about 60cm or more. To add to the confusion, Shadow and the stubble were roughly the same colour. Graeme, way up there in the tractor had problems.

Identifying a small Silky type in the long stubble, not running over her and continuing to sow in straight lines didn’t seem to be mutually possible. At first he’d stop the tractor, get out and tell Shadow to go home. Shadow would look embarrassed to be caught out, lower her head and head home. Graeme, feeling that was easy, climbed back into the tractor and resumed sowing only to notice the stubble moving in an odd way beside the tractor once more. After a few more attempts to be stern and send her home, he realised that the only way to prevent Shadow becoming natural fertiliser, and really getting into my bad books, was to pick her up, put her in the tractor and keep working. Shadow was in seventh heaven. Her life’s ambition was to be a farm dog. Graeme doesn’t own a ute and isn’t the sort of farmer who would take a Kelpie in the back anyway – Silky types were totally out of the question – so her farm dog activities were limited to sitting on the front seat of my Saab when I went up to the village for farm supplies.

The first time I did this, the postman looked out the post office door, saw Shadow sitting up on the seat trying to look like a Kelpie on official farm business and asked what the hell that was? I told him it was our farm dog. Bad move. I then had to stand there and listen to a lengthy lecture on why a little Silky type couldn’t possibly be used as a farm dog. Thankfully the car window was closed so Shadow didn’t hear all the insulting things said about her size and general fluffiness. No amount of telling him I was joking worked. We were new to the area and considered most likely city slickers come to play at farming, and needed educating in the kindest possible way. Shadow and I returned home and I assured her that she could be a farm dog if she wanted. After all she was a dog and this was a farm wasn’t it?

I didn't realise that Shadow had taken the farm dog thing into her own hands, or rather, paws every day of the week; taking weekends off to keep me company, until I came home one afternoon and Shadow was missing. After searching everywhere and fearing the worst for a little fluffy dog, I tracked Graeme down to find out if he knew anything about her disappearance only to see her sitting up on the floor of the tractor, looking out the huge windscreen as it circumnavigated the paddock. She had a look of pure bliss on her face. Unlike Graeme who, whenever he glanced down at her, had a totally different expression on his.

Ever the supportive wife, after picking myself up and trying to control my laughter, I told Graeme that he was lucky that no local farmer had visited yet. I informed him that if one of the locals came along and found Graeme working in the tractor with a fluffy little Silky Terrier Type at his feet he'd lose all credibility as a farmer before he had a chance to gain any. Shadow nodded her head wisely and continued to help sow the crops. Once harvest started she had an even better view in the header! Talk about city slickers playing farmers!!!

I think Graeme was secretly a bit relieved when I was medically retired and Shadow voluntarily retired from her tractor and header duties. Graeme’s little secret was never found out by the locals and I've kept mum about it until now. So you didn't hear it from me - right?
Posted by Rosemary at 7:14 AM No comments: