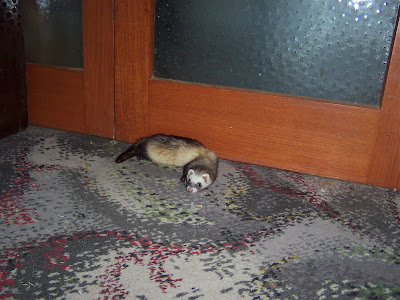 We had a major gaol break here last night. For a while there I thought that I was going to have to tell Savannah that Cecilia had run away and I really didn't want to be the one to tell her she was one ferret short.

I first noticed that the kitchen had one ferret too many running around the floor. Any ferret running around the floor at night when Graeme could come inside an minute is one ferret too many. I rushed out to scoop up said ferret and put her back in the inside cage where they all sleep in winter. Jocie, as this ferret proved to be, went back into the cage peaceably while I did a head count and came up one ferret short. Neither big fat boy ferret can fit through the little opening at the back of the cage and tend to sulk when the females find a way out. I have adjust the bottom bars of the cage from time to time to stop skinny little female ferrets exiting and going on excursions around the house. I began my search for Cecilia noting that the front door was open and saying a little prayer that she hadn't left the building. A quick look outside didn't give me any clues as to whether she'd gone on a big adventure or just confined herself to finding mischief in the house.

I next checked our bedroom and found evidence that a ferret had been in there having a great time upsetting Lancelot who was on the bed with his tail brushed out and a hunted look on his face. Further evidence to the fact that a ferret had been here was that the bin was overturned and all the rubbish strewn over the bedroom floor (ferrets can't resist rubbish bins and love to sift through their contents for treasures). I heard a scuffling in the kitchen and raced out there only to find that this escaped ferret was Jocie making a reappearance because, in my eagerness to find Cecilia, I'd forgotten to close up her escape route. I kept hold of Jocie while continuing my search for Cecilia.

We went outside together to do a thorough search of the front yard, but I realised if Cecilia had gone out there there was no way I was going to find her. Never the less Jocie and I put in a few frantic minutes searching through the undergrowth. Well I put in the minutes searching, Jocie tended to try to free herself so she could get into that undergrowth and cause me more angst. In the end I had to accept that the only way I was going to find Cecilia if she was out here was for her to reveal herself, give herself up and come quietly. Jocie and I went inside to continue our search.

More rooms were examined thoroughly and I eventually gave up and put Jocie back into the cage and was just repairing the escape route when a little face with a black mask popped out from behind the fridge. I sat where I was, my head moving back and forward between the cage needing escape proofing and the ferret needing scooping in before she went further afield, not sure which to attack first. In the end scooping in the fugitive ferret took priority. I added a stern lecture on the wickedness of giving me heart palpitations, said a little thank you prayer and returned her to the cage, only to find Jocie half in half out of the escape route. As soon as she realised I could see what she was up to she froze where she was, obviously hoping that I wouldn't notice half a ferret sticking out of the cage.

I moved to the back of the cage and tried to poke the excess bits of ferret back into the cage without hurting her, while Jocie tried to add to the ferret excess on the wrong side of the cage (or I suppose the right side of the cage from her point of view). Cecilia came to join in the fun while the fat boys just looked on with sour, jealous looks. In the end it was easier to let them both escape while I sat there and pop them back in the front door. Admittedly their hearts weren't in the great escape this time, they knew they'd be returned to the cage as soon as they got out, but if there's one thing a ferret won't admit it's defeat. So I duly scooped them both up, returned them to the front of the cage and dashed back to fix the unintended back exit before they beat me to it.

Thankfully there were no further ferret escapes during the night. Oh there were many break out attempts from the sounds of attempts to prise the cage bars further apart, but the reinforced cage held up to every ferret assault. I imagine the boys settled down for the night with smug little smiles when they realised the girls were just as locked in now as they were.
Posted by Rosemary at 8:10 AM 2 comments: