The Arrival Of The Header

The Arrival of the Header 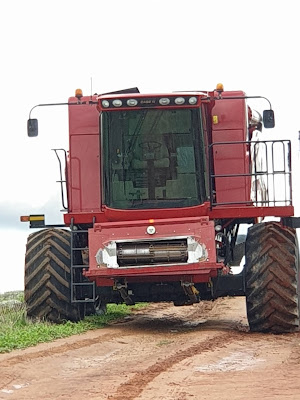 There's not an animal in sight with this latest episode of happenings at Spring Rock.

Well!  It's been all fun and games here lately.  After the long wait for the header to get here, it arrived, wrapped in high drama.

Last year’s harvest was encumbered with many header breakdowns.  Graeme would just get back into the swing of things, harvest-wise, and something would break, crack or just plain refuse to work on the header.  It has served us well for many years, and the truth of the matter is, that the poor header is just old and well and truly entering its troublesome years.  With a good harvest behind us, the decision was made to find a newer, second hand header with all the special bits and pieces Graeme wanted.  It took some time to track down the perfect header, but once it was found and our header budget, drastically increased, Graeme agreed to buy it.  There was a long wait between the agreeing and the actual buying, all to do with the header’s present owner’s (who was trading it in on the latest model) wish to keep hold of it until he actually had his new header on his property – a very wise move that ensured he still had a header if something went wrong with the arrival of the new one arrived.

The day finally arrived and the header was available for us to buy.  Getting an invoice to pay for it from the dealers was surprisingly difficult; I suppose they were just busy trying to sell all their other trade-ins, but the invoice was finally emailed the day before the header was due to arrive here and we could now pay the invoice.  At least we thought we could.  First, on Monday the bank made paying for the header very difficult.  Poor Graeme had to make more than half a dozen calls, with each one timing out while the person on the other end went off to find the answers to Graeme’s problems.  When the bank app told Graeme that there hadn’t been any activity for a while, so it was shutting down the session, Graeme had to ring back each time, explain his problem all over again only to have that person put him on hold while he/she went to find the answer and of course, it timed out again.  Graeme, despite the obvious frustrations of this little exercise, managed to stay calm and polite to each person to whom he spoke, but I did think I saw a bit of steam coming out his ears.

Once that was finally sorted and the payment for the header was made all we had to do, was sit back and wait for the header to arrive on Tuesday.  Well, that didn’t go according to plan either.  Tuesday arrived bright and shiny, with blue skies and dry roadways (the importance of which will become clear later on).  The salesman rang to say the truck was having difficulties (unspecified) and hadn’t arrived at the dealership as yet.  This was around lunchtime and there wasn’t enough time left in the day for the truck to drive the long trek to get the header here during daylight, so they were rescheduling for Wednesday.

Wednesday’s weather forecast was for rain, followed by more rain.  Our 2km roadway from farm’s our front gate to our machinery shed is not a pretty sight after a bit of rain after a lot of rain it’s even worse.  Navigating the sloshy bits and the deep puddle bits is not for the faint hearted.  The day started with 40mm of rain (which our crops greatly appreciated) and rain just kept on coming all morning, only varying between showering and pouring down.  The header left on its long trek at 9.30am and we crossed our fingers and hoped for the best.  Graeme advised the salesman not to bring the truck on to our lane, but to offload the header on the main road (tar) and drive it along the lane (dirt) and then on through our gate and ultimately to the machinery shed where a nice, new spot was waiting for the header to settle down until harvest.

The salesman, who arrived with the header to teach Graeme how to use all the high tech stuff, and truck driver took this good advice and all looked hopeful for a successful delivery of one header.  That’s when the fun and high jinks began.  The salesman drove the header along the lane and, with a false sense of security, continued through the gateway and on to our farm roadway.  Having never before seen what Spring Rock laughingly calls a roadway, the salesman seems to have lost all confidence and decided not to follow the soggy tyre ruts but to straddle them and choose the ground less waterlogged – big mistake.  The higher parts of the roadway did not have a firm base, made from decades of cars and machinery compacting to ground, underneath.  The header slipped sideways and into the newly erected boundary fence.

Graeme, who had driven our four-wheel drive out to meet the salesman (well really he drove out to greet the header, but we’ll say he went to meet the salesman), managed to bog our car a short distance along our roadway from the stuck header.  I wasn’t present for the discussions that took place with two stuck vehicles (can you call a header a vehicle?), but the upshot was that the salesman opted to forgo the header tutorial for another day, walk back up the lane to meet the truck there and drive back to his dealership, leaving Graeme with the stuck aforementioned vehicles to sort out.  The salesman did say he’d wait a few days to bring the header comb down here.  He had intended to bring it Thursday, but he wasn’t going to brave our roadway again until it had a chance to dry out a bit. 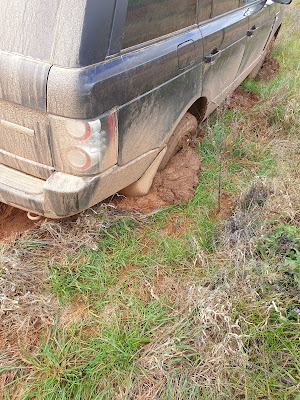 Graeme walked back to the house, collected me and the tractor and we drove out to free the car from its ignoble position, stuck deep in the mud.  I busied myself taking photos of the stuck header and the bogged four-wheel drive to share with Ethan, our farmer type grandchild.  With the tractor doing all the heavy work, and me behind the wheel just steering the car as the tractor pulled it out, the car was soon out of the bog and trying to look like the whole embarrassing incident never happened.  Graeme decided to drive the car back to the house (for which I was truly grateful), finish his interrupted lunch and have a well-earned cup of tea before tackling the header issue.

To remove the header, Graeme had to dismantle our new boundary fence and drive the header out through the opening, then put the fence back together.  The header wasn’t bogged, it just didn’t seem to want to do anything but snuggle up to the fence, no matter how many attempts were made to steer it in the other direction.  One silver lining to this whole dark cloud incident is that our neighbours decided to plant the paddock on the other side of this fence to crops this year.  He’s run stock in that paddock for a number of years now and if Graeme had to drop the fence with sheep or horses in there, the unsticking the header process could have been a lot more fraught.  Thankfully, the header behaved once Graeme was in the driver’s seat and it was a simple matter of driving it out of the problem area and onto the roadway.  All Graeme had to do then was put the fence back together, drive the header down to the machinery shed, get me to drive him back for the bike and then back again for the tractor and we could put this whole distasteful episode behind us.

The header is now ensconced in the machinery shed.  Hopefully it has now got all its bad behaviour out of its system and will now become a model member of the Spring Rock community who no longer wants to get up close and personal to fences.