Finally, after months of battling with Aslan to take his tablets for his wonky shoulders, his old style ones are back in stock.  The vets’ have been waiting for months for the arrival of these tablets.  I too have been waiting months for the tablets to arrive.  I’ve been given the same medication produced by a different pharmaceutical company in place of the Caprieve but getting these into my beautiful boy has been, as Tigger would say, fraught.

The Caprieve are very small and easily hidden in a bit of cheese.  It’s also possible they taste better than the replacement tablets, but I’m not about to test that theory out for myself.  When I first started medicating Aslan I tried various disguises for the tablets.  I tried tinned dog food – Aslan delicately ate around the tablets and left them sitting forlornly in the bottom of his food bowl.  I tried making a raw meatball with the tablets at the centre with the same results.  Then I tried two pieces of cheese with the tablets hidden in the centre and finally found the ideal delivery system to get tablets into Aslan.

From the time Aslan had his first dose of the Caprieve/cheese combination I had no problems with him gulping down the tablet loaded cheese as soon as it was in his mouth.  The replacement ones I was given are considerably larger and Aslan can tell when there are any in his cheese - damn his doggy heightened sense of smell.  He always takes the cheese (usually with a put upon look on his face) and acts as if all is going to be well this time; he adopts an innocent look on his face and awaits his chance to deposit the cheese and tablets on the floor, but I've learned my lesson. I know that it's a ruse and he will spit out the cheese as soon as I turn my back.  Some days his tongue was very dexterous and Aslan managed to spit out the cheese with the tablets embedded in them and eat the other, tablet free, piece of cheese.  So, I now pop the cheese laden tablet into his mouth, quickly put my hand under his chin and then we wait it out.  Aslan looks at me and I look at Aslan and we see who gives in first.  I'm at a disadvantage because I'm usually bent over holding Aslan's chin while he reclines gracefully on the floor.  Drool is involved of course.  Graeme told me to put my hand over his nose to make him swallow before trying to take a breath - a trick a vet showed us many years ago for another dog who resisted tablet taking.  This has worked for other dogs I’ve owned in the past but these dogs were Kelpies or Labradors or the like.  I pointed out to Graeme that with Aslan’s acres of jowls he can suck air in from the sides of his mouth for as long as he likes and it would take a larger number of hands than I have to cover the entire mouth area of a Saint Bernard.

While holding his chin to stop him spitting the tablets and cheese on the floor I try rubbing his throat, talking encouragingly to him, pointing out he's never won a cheese and tablet battle yet and that he'll feel a lot better once the tablets are down.  Aslan just looks at me with his long suffering expression firmly in place and refuses to believe that he will never win this battle - maybe, he seems to be thinking, today could be that day.  Eventually Aslan will roll his eyes, heave a sigh of resignation and swallow the dratted tablets.  He pokes his massive tongue out as proof the tablets have gone down and I can now get back to my life. I try to be a good sport and not crow over yet another win in the Aslan/tablet battle, tell him he’s a good boy and give him a pat and a tablet free piece of cheese so he has a reward for doing the right thing.  He knows there's no tablets in this one so takes the cheese quickly and gulps it down.

All this isn't taking part in a calm and casual way.  You have to remember that I also have Cleo up close and personal and Cleo loves both cheese and attention and in her opinion, despite the fact that she's already eaten the cheese I gave her when I came out to start this whole tablet giving process, Aslan is getting far too much of both.  She buzzes around the perimeter of the battle of wills area, nudging my hand to remind me there is more cheese there and she's perfectly willing to take it off my hands or pushes her face into mine in case I haven’t noticed she’s there.  Aslan usually gets a gentle butt in the head to encourage him to get it all over with so Cleo can get her cheese and pats, and of course, more drool is involved.  Now that the smaller, Aslan acceptable, tablets are here Aslan should just go back to swallowing the cheese as soon as he's given it.

I say “should”, but knowing my puppies I'm not that confident. 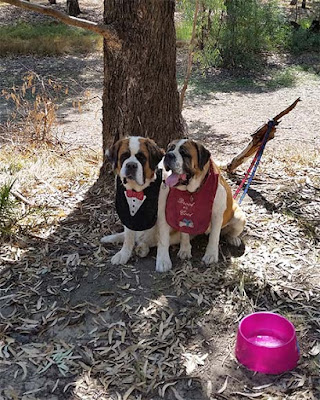 I couldn't get a decent photo of Aslan at tablet time with only one hand free so here's one of Aslan and Cleo on a recent day out.
Posted by Rosemary at 8:10 AM 1 comment: