The Feral Cat And Me 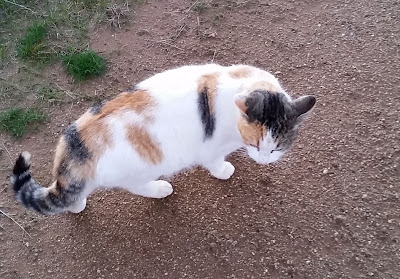 I am working towards befriending a feral cat.  She has been on our farm for months now and is one of the prettiest tortoiseshell cats I've ever met (but please don’t tell Nefertiti I said that).  I have a feeling she hasn't always been feral, even though she looks quite young.  She seeks me out if I'm in the yard when she's around and talks to me from a safe distance, even following me for a bit if I walk away.  Today she was eyeing off the chooks and while most of them could give her a run for her money, George and Emu are tiny little Silkies and I don't think they'd be a match for her.  I ended up opening up the gate between George and Emu and their two ducks and letting the rooster have free access if he needs to chase the cat off.  I just hope she doesn't try.

When I found her looking at the chooks from the outside fence, she was under the boughs of our huge pine tree.  I had a chat with her and she sat and enjoyed out conversation even though I was telling her she had to go find mice somewhere else.  She stayed put so I went outside and under the branches to encourage her to move off.  She headed for the dam over the back so I veered left and added a few dead branches to Graeme's bonfire.  I turned and saw that the cat had come back for me.  She was standing on top of the rise calling to me.  I walked over and of course she moved off, so I sat quietly on the bank of the dam and little by little she made her way back to me, talking all the way.  In the end she got within about two feet of me and sat and talked for a while, then headed off towards the back paddock.  I got up and went back to the fire to have a chat with Graeme and in a few minutes the tortoiseshell was back looking for me.  I walked over and had another chat with her until she decided that we were friends now and I wouldn't object to her going back to watching the chooks.  She was wrong.  The trouble was once I was inside the house yard again she just returned once more to watching the chooks.  I left some cat food out for her that night on the front porch, well away from chooks.  She paid me a visit before I went to bed and snacked on the kibble while we talked.

I finally made true friends with the "feral" cat on Wednesday.  I'm pretty sure she must have been someone's cat at sometime.  She doesn't trust Graeme and runs for cover when she hears his deep voice, but she talks to me and has been following me at a safe distance for a few days.  When I let the chooks out this afternoon I heard her talking to me.  She was under the boughs of the big pine tree, just outside the chook pen – what I’m coming to think of as her usual spot.  After I'd collected the eggs and let Phoenix, my bachelor red rooster, out with the rest of the gang, I went outside to say hello.

I stood quietly and offered her my hand to sniff.  She came right up to it and had a sniff then rubbed her head against my hand.  I gave her a little pat and she took off.  I thought that was enough progress for one day, but the tortoiseshell had different ideas.  As I walked off she called to me so I turned around and found her following me.  I stopped; she came up to me and looked up.  I bent down and gave her a good pat, scratch around the ears and a back rub.  She lapped it all up.

Eventually my back told me I couldn't take any more leaning over so I straightened up and said goodbye.  The cat followed me and I had a go at picking her up for a pat.  She loved it, turning this way and that for a better pat, but demanded to be put down very soon.  I put her down straight away so she’d learn that I won’t do anything that makes her feel uncomfortable, had another go of picking her up and patting her until it was time to say goodbye again, only for her to follow me, talking all the way.  I began to think she was going to be a permanent shadow of mine.  She came through the gate into the house yard with me and I headed for the house.  I got her some cat kibble and went back out.  She had a nice little snack in between asking for more pats and head scratches.  When she was finished I told her I had to sit down so I went over to our outdoor furniture.  She followed warily for a while, but mentioned that she knew there were big dogs about.  I promised her they were locked up because the chooks were out and she very carefully followed me to the chair keeping an eye out for big dogs in case I had lied.  She jumped onto the table and then proceeded to lap up all the pats and scratches she could get, throwing some head-butts in herself from time to time.  While she looks to be a young cat, she has a bit of offers of affection to catch up on I think. 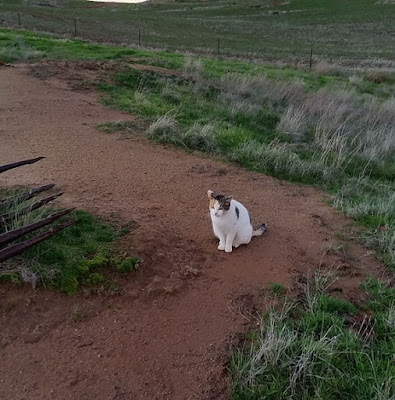 After a while she climbed down onto my lap, but couldn't really settle there and chose to socialise from the table.   She did have a few tries at my lap, but just couldn't bring herself to stay there.  At one stage she saw Ambrosia looking out the window and she then sat with her back to me so she could keep an eye on that cat, while I continued to talk to her and pat her.  I finally had to say goodbye, yet again, to get the chooks in and she followed around and watched with interest.  I told her to put her thoughts somewhere else because chicken dinner wasn't on the menu.  She was a help though.  I had one Faverolle hen who just kept going around and around the base of the plumbago bush near the aviary where I couldn't get her.  The cat bounded under the bush in the general direction of the hen and the French Girl came tearing out and headed straight for the chook pen.  I told the cat that, while I was grateful for the help, I didn't think her motives were as pure as she was trying to convince me they were.

In the end, after a very long time getting to know the tortoiseshell (who I’ve decided to name Venus) I took her around the front, told her to stay put because I was letting the dogs out and returned to the back porch to do so.  She had stayed in the front for a little while, but Graeme saw her under the car when he came in.

We caught up again on Thursday and Friday.  On Friday night it was raining so Venus once again came to the front door to let me know she was available for snacks and also that she was getting wet so could I please turn off the rain.  I opened the door followed by Tristan and Nefertiti.  Tristan saw Venus on the other side of the door and left in a huff.  Venus was very rude to Nefertiti, using language I can only assume she’s learned from the tougher element of the feral cats around here.  Nefertiti was shocked at the language, but being brought up in a much more sheltered environment chose to look outraged rather than return fire.  I’m sure Venus was asking me to put the three house cats outside in the rain so she could come inside and dry off.

I told Graeme it looks like we might end up with an outside cat, I doubt she and my three inside cats could ever be friends, but who knows.  If that is the case I'm going to have to get her to the vets to have her spayed.

The number of non nomadic feral cats she could contribute to the farm is a very scary idea. 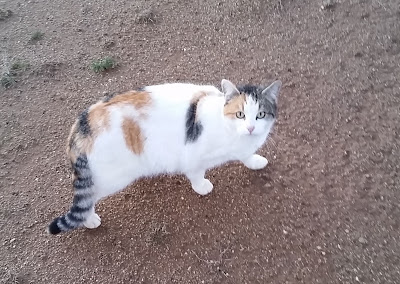 The clicking of the phone camera when I took these photos, disturbed Venus.  She wasn't sure if that little black rectangle was going to attack or not.  I let her sniff the phone and she settled down realising it wasn't a threat.
Posted by Rosemary at 10:04 AM 4 comments: