In Which We Once Again Visit My Toilet Habits

I know I have posted before about the dangers of using our toilet.  It's not that I'm obsessed or anything but just a warning.  This post is going to be cover that topic yet again.


For those of you that are new to Life At Spring Rock our only toilet is located in the laundry which is outside our back door on the porch.   All our dogs have tried to lay claim to it over the years.  Some have been successful, some have had to wait for the another, tougher dog to die of old age, and some are still being kicked out whenever they put a toe over the threshold (Juno and Dione, the Kelpies, will never give up though - they've been trying unsuccessfully for over 12 years now).  You can read about the wars for laundry domination here   http://lifeatspringrock.blogspot.com/2009/01/battle-for-laundry-floor.html  and the difficulties faced when using our facilities here   http://lifeatspringrock.blogspot.com/2009/04/please-take-care-when-using-our.html 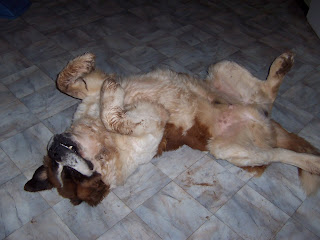 Once gain, it's all about Billy.  I often tell him it's a good thing he's such a handsome fellow (just look at the photo above to see how gorgeous he is) because he certainly causes enough trouble in the menagerie.

Billy is now channelling his Swiss ancestors and enjoying the cooler weather, but he is becoming a bit of a problem in the laundry/toilet yet again.  I suppose it all started when I had to push him out and close the door a couple of days ago while I was dyeing fabric.  The laundry just isn't big enough for fabric, dyes, dye-pots and other dyeing paraphernalia, myself and one large St Bernard.  As Billy has yet to master the art of fabric dyeing that meant he was the one who had to go.  He tried closing his eyes so he couldn't see me pointing towards the door.  Being deaf, this is his supreme weapon in the fight to do as he pleases and Billy uses it at every opportunity.  Since being turfed out  that day he's re-claimed the laundry as his territory and refuses to budge an inch when I want to use the facilities.  Billy sprawls himself out the full length of the floor with the majority of his bulk right in front of the toilet, closes his eyes and assumes the look of an exhausted dog just catching up on some well earned sleep.

I get up at 6am.  Well my body gets up, my brain takes another couple of hours to join it.  Consequently I try to operate on autopilot until my brain catches up.  Visiting the laundry used to be so simple I could do it with my eyes closed.  Lately I've encountered acres of St Bernard almost wrapped around the toilet base and overflowing out far too far to manoeuvre around him.   I tried, poking him with my foot, pushing him from one end or the other and just grumbling ineffectually to his deaf ears. Nothing worked.  Billy stayed put and feigned sleep.  I knew he wasn't really asleep because he wasn't snoring.  In the end I practically had to do the splits to accomplish my mission - no mean feat when your brain is stuck in neutral.   Billy didn't budge.  At one stage while still trying to position myself so I wouldn't fall off, I trod on Billy's leg.  Of course I apologised profusely - all Billy did was raise his head (giving the lie to being asleep), give me "That Look" and resumed his recumbent and possessive position around the toilet.


I found myself apologising to Billy and making a bigger effort to not disturb Billy's pretend slumber any further ("That Look" has that effect on me I'm afraid).  One of these days I'm going to get a nasty injury trying to bend myself around Billy's recumbent figure while trying to use the toilet.  I shudder at the imagined scene in Emerency at the local hospital as I explain how I sustained the injury.

All I could do this morning was grumble to myself that this wouldn't happen to Graeme.
Posted by Rosemary at 9:15 AM 3 comments:

Before I explain the title of this blog, Paula M asked: So the battle has been on-going for a couple of weeks now. Any sign of victory...for either side? My money is on the cat.
Well Paula, we have had some success, but the battle hasn't been won yet by any means.  Ambrosia is jumping up less while we are around to do something about it, but we suspect she goes to town when we aren't in the house and sits on benches just to prove she can.  The over worked water bottle has been brought into use yet again for a new reason though, and that brings me to the title of this blog.
Chocha, my usually very boring axolotl has been placed in maximum security protective custody 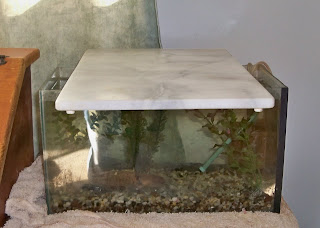 That's my very heavy marble pastry board on top of her tank.
Two nights ago, Ambrosia climbed on the box on the left side of this photo to have a drink of water.  We keep a bowl of water near the cats' food and they get a drink of milk every morning because they are spoiled cats, but Ambrosia and Tristan prefer Axolotl flavoured water.   As a matter of fact all our cats have preferred axolotl flavoured water.  Chocha, knowing her place in the food chain, has always shown good sense and stayed at the bottom of the tank doing her best submerged log impersonation and peace has reigned.  Ambrosia would have her drink and hop down without another thought about why the water tasted so much better than the water bowl water.

Two nights ago Chocha proved herself to be the dumbest axolotl on earth.  While Ambrosia was having her nightly drink of water Chocha could stand it no longer.  She swam to the top of the tank and rubbed noses with Ambrosia.  Ambrosia reacted just the way you'd expect a highly strung huntress to react.  First she rose about three feet in the air, performed a very fine double twist while she was up there and finally landed on the floor with a startled expression that had me regretting I don't keep the camera strapped to my body.  My next thought was that trouble was just around the corner and I was right.

Ambrosia sat down and had a little think about what had just passed.  Her normally calm water tank has sprung to wet, slimy life and touched her nose. Ewww!  Ewww! Ewww!  She stopped thinking in order to give said nose a good scrub followed by a thorough washing then resumed thinking.  Obviously there was something alive in her water tank.  If that was the case it was also obviously prey!  Why you ask?  Because to a young Bengal cat if it moves its prey.  It might be the play with it and stay friends type of prey (Nefertiti, Tristan and her favourite toy, The Christmas Duck)), play with it and feel superior because I am so much better at hunting than they are  type prey (Graeme and me), catch it, wrestle it to the ground and never quite win, but never give up until Mum intervenes prey (the ferrets) or the very, very rare, if you can catch it you can chomp on it prey (mice, moths and other insects).  Ambrosia suspected that this prey fell into the last category.

"Well now," we could see her thinking, "This is going to be FUN!!!"  Ambrosia climbed back onto the box and began her hunt.  This would take a bit of finesse.  She began by just sitting there waiting patiently for Chocha to come back up and rub noses again.  While Chocha may be the dumbest axolotl in the world she is not completely without self preservation instincts.  She went back to her submerged log mode and kept her head low.  Meanwhile, I  removed Ambrosia from the box and told her her fish tank water drinking days were over.  Ambrosia was no sooner on the floor  that she'd jumped up on the box again.  This time she knew she was going to be removed just as quickly so she dove her foot into the water trying to scoop Chocha out before she, Ambrosia, was removed to the floor once again.  Chocha panicked, an emotion of which I thought an axolotl incapable, and swam to the top of the other end of the tank. "Right!!" thought Ambrosia as she was dragged away, "Progress is being made!"

I sacrificed my sandpaper board (used for tracing patterns onto fabric) and placed the Contact covered underside on top of the tank.  This board is only made of sandpaper, cardboard and Contact so I wasn't hopeful that this would keep Ambrosia out.  I advised Graeme to ready the water spray bottle that was closer to him than me (he's a better aim anyway) and the battle began.

At first Ambrosia inspected the board, sniffed it all over and decided it wasn't going to present much of a problem.  From where I was sitting I too was inspecting it for weaknesses and I was inclined to agree with Ambrosia.  I readjusted the end so that it was under the craft box's little overlap bit in an effort to stop the board simply being flipped off.  Huh!  Ambrosia wasn't going to try anything that delicate.  She jumped on the long edge of the board sending it flying, rushed up onto the box again while Graeme was scrabbling for the spray bottle and tried to scoop Chocha out yet again.  Water was everywhere, the spray bottle had been brought into play and little sprays of water marked the lounge chair, floor and craft box, Ambrosia's feet were wet and Chocha has actually managed to make a small wave that overflowed the top of the tank in her panic.

This problem was going to take more thought on my part.  We needed either a new tank with a top on it or something heavy and waterproof to act as a top.  We'd only been in town shopping that morning so we couldn't find anything permanent for another week when we go to town for our next weekly grocery shopping day.  I sacrificed my marble pastry board.  Graeme settled in on top of the tank while Ambrosia watched from the floor.  I could see her little brain working out ways to dislodge this prey acquiring obstacle as well.  As soon as the marble board was settled in place she jumped up and tried the same trick she'd used for the sandpaper board.  No luck, also another jet of water streamed her way getting her right between the ears!  Ambrosia eventually called it a night and took up a disgruntled position near the heater while she planned her next move, to be executed at a later date.  Chocha returned to her normal routine of doing nothing and peace returned to our loungeroom.

Ambrosia is still considering her options.  Why she has been adopted by a pair of prey loving humans she doesn't know.  What she does know is that these humans are going to have to learn that this in now her house and all prey are hers by Divine Right.  Until then she'll have to settle for swatting and wrestling the occasional ferret and making jungle cat growley noises while eating her canned cat food.
Posted by Rosemary at 7:52 AM 7 comments: