Recent bathroom renovations have caused me to look back over the years at the fun and games the old bathroom endured and more or less survived.  The old bathroom was installed when the house was built in the 1960's.  The floor had little square tiles in shades of brown and cream, the walls were pink Lamipanel (that by the time we moved in had lost the top polished surface and were now a porous pale pink and difficult to clean.  The bath was a pink cast iron model that had suffered in the past and had one huge repair in off white waterproof putty or some such material and a newer (around the 1980's possibly) missing chunk where the iron had gracefully rusted.  This bath thought was big and deep and a joy to lie back and relax in a bubble bath whenever our tanks had sufficient water for me not to feel guilty about using all that water.  The real joy of this bathroom was a tiny shower with a brick high step over into it, a 2 metre high Lamipanelled wall with a wooden shelf like top on it and a shower curtain.  The old bathroom had no toilet - that was in the laundry attached to the outside of the house.  The new bathroom has no bath but it does have an inside toilet.

I have had occasion to write about the ordeals related to my personal hygiene activities before.  I've mentioned showering with a duck (on purpose but reluctantly), almost getting a bath with Billy (definitely not on purpose and very reluctantly!).  I have also showered with ferrets unintentionally - they just muscled in on my shower one day by walking through the shower curtain and passed rude comments about my weight while paddling around in the water on the shower floor.  I've also written about the trials and tribulations of using our laundry toilet especially during the early hours of the morning. This was mostly due to Billy's presence in the laundry and his determination to become one with the toilet pedestal.  Back before the new bathroom showering once again became fraught with potential bodily harm - my body of course, the menagerie behave very circumspectly around Graeme at all times and wouldn't dream of intruding on his daily personal hygiene rituals.

When they were kittens Ambrosia and Nefertiti were much like toddlers - they wouldn't let me out of their sight and followed me everywhere I went to see what new and exciting activity on which I was about to embark.  In their efforts to keep tabs on me at that time in their lives Ambrosia and Nefertiti both wandered into the shower at various times.  That's the disadvantage of a shower curtain compared to a glass screen.  Nefertiti visited just once, found the falling water decidedly not to her taste and remained on the outside of the shower curtain ever after.  Ambrosia, on the other hand, visited a few times passing the time of day with me while batting at the falling water before deciding that nothing exciting was going on in there.  She's not adverse to a bit of water to play with but in her opinion I took up far too much of the shower recess to allow for free access to the water, so she stopped visiting - much to my delight.

Back when we still had the old bathroom Ambrosia rediscovered where I disappear to each morning and decided to join the party.  First she'd peek behind the shower curtain to make sure it was me in there and not Graeme.  This despite either following me in to the bathroom or seeing me enter the bathroom if she was already in there. I don't know if Graeme had words with her on the subject of disturbing his shower, or she just preferred to visit with me alone, but when she reassured herself that it was me in there, she would spring up onto the shower wall and sit looking at me for a little while.  While she considered the sight of me naked and dripping wet I began to worry - not because I have body image issues, but because I value my skin in one piece.  All enjoyment of the shower disappeared and I had to  stay sharp and keep a wary eye on the Bengal above my head.  If Ambrosia jumped up there before I had washed my hair I was in real danger of getting soap in my eyes as I tried to lather up and keep an eye on her at the same time. 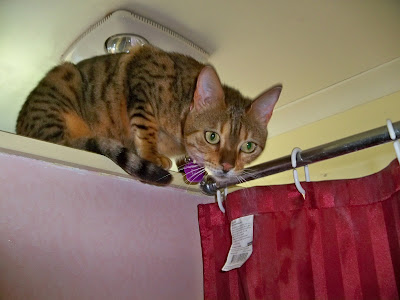 Then she'd get the brilliant idea that now would be a good time to ask for a pat or a tummy rub.  She indicated her readiness by flipping over on the timber wall top and attempting to display the tummy area needing attention. I was always quick to comply so that her contortions were kept to a minimum, trying to get the pat in before she actually flipped on her back because you may remember that Ambrosia has a terrible sense of balance (actually she has no sense of balance to speak of at all) so my showers became a very exciting activity fraught with all sorts of painful possibilities.  When Ambrosia flipped on her back on a narrow surface she invariably ended up on the floor with a confused look on her face.  Sometimes she ended up on the floor on the outside of the shower wall and sometimes she ended up in the shower with me.  I would pin myself against the opposite wall, withthe taps wedged against my spine, in an attempt to avoid the claws - sometimes I was successful, sometimes not.  The fact that my naked body stood between Ambrosia's fall and the floor was always painfully obvious to me - an anxiety I could have done without.

Ambrosia didn't seem to mind my wet hands - as I've said before she doesn't mind water at all.   Ambrosia, as you can see in the photo, teetered on the edge of the wooden ledge and didn't consider her balance challenged nature while she performed all sorts of contortions in an effort to receive a pat or two while I was otherwise occupied.  Heaven help me if I ignored her and she felt obligated to try harder!  I'm just lucky that the man who built this house felt the need for a very wide top to the shower wall.  I doubt he had shower visiting cats in mind when he chose that bit of timber for the top, but I blessed him every morning.

I wasn't  comfortable excluding her from the bathroom while I was in there.  Her plaintive cries on the outside of the door I could have endured but the litter tray has always lived in the bathroom and Ambrosia wouldn't have been above finding somewhere else to use instead if she was denied access, even if it was just to get even for closing the door on her.  So it was, and still is, access all areas, or at least access the bathroom for Ambrosia at all times.  The new shower has a very good glass shower screen all the way around with no convenient ledge for a Bengal to sit.  When the new bathroom was finished and I took my first cat free shower Ambrosia accompanied me into the bathroom as usual.  When she discovered there was no space for a cat to sit, recline or otherwise occupy while watching her mum shower from a great height, she gave me the look that is reserved for someone who has bitterly disappointed you.

Well, I'm off to have my shower now.  Ambrosia will still follow me in as she always does, but these days she spreads out on the bath mat in front of the shower door and chats to me, most probably sadly remembering the good old days when she felt more personally involved with my daily ablutions.  She complains when I open the door and step out because she either has to move from her comfortable spot or get dripped on.  Usually she just shuffles to the side of the mat and allows me a small amount of shower mat to stand on.  I think she's still miffed that her shower ledge wasn't incorporated into our new, modern bathroom.

I will managed to enjoy my shower none the less.
Posted by Rosemary at 8:10 AM No comments: