Summer is well and truly making its presence felt here at Spring Rock.  We've had quite a few days over 40 degrees Celsius and the menagerie, with the exception of Cleo and Aslan, are looking forward to Autumn.  Why would two Saint Bernards not be looking forward to cooler weather you ask?  During the hot weather Cleo and Aslan are allowed inside (don't get  me wrong, I'd have them inside all day every day, but the menagerie has to make deals with Graeme remember) to lie on the kitchen floor and soak up the air cooler, or in Cleo's case the cool of the refrigerator.  Cleo lies in a very unladylike manner on her back with all four legs spread wide, waving in the breeze, to allow maximum tummyage for the air from the cooler duct while cozying up to the refrigerator to soak up the cool of the metal.  This makes getting cool drinks, milk for our tea or any other item stored in the refrigerator almost impossible to access.  This does not further the puppies' chances of being allowed in on cooler days.

Navigating a kitchen full of Saint Bernards is a feat worthy of the Olympics.  One has to first get through the baby gate array set up across the opening between the kitchen and dining room where a wall was removed way back in history.  The array consists of three interlocked wooden gates tucked between the ferret cage and the little bit of wall left over on the right and the refrigerator and the other bit of wall on the left.  Half the problem with getting through this gate is Cleo's ungainly position against the refrigerator.  Those waving legs mentioned earlier often get tangled in the spaces between the poles of the gate.  First, you have to untangle those legs, only to find that when you've removed one and are concentrating on the other, the first leg returns to its original position, meaning the unfortunate untangler has to start from scratch.  Once this never-ending task is completed (if Graeme is involved many loud, unpleasant words accompany the task) the gate is slid along the floor to remove the end near the refrigerator - easy, but then you have to get through the gateway that is full of Cleo.  Asking her politely to move gets you no-where, growling at her gets you a worried tail wag and a bit of a wiggle.   Sadly this wiggle doesn't remove her body from the gateway opening.  Usually, it takes sliding her along the tiled floor with your foot until there is enough room to get through the gateway.

Finally, our intrepid homeowner is in the kitchen, and if he or she doesn't snag any contents needed from the refrigerator while Cleo is getting her bearings, and before she returns to her favourite spot while he or she boils the water or gets drinking glasses out or whatever, it serves he or she right!  Now is no time to congratulate yourself on a successful mission.

Once in the kitchen proper, you still have Aslan to navigate.  While Aslan assumes a much more compact shape while soaking up the cool, his total mass is a force to be reckoned with.  Aslan lies on his tummy resting on his bib laid along his paws - the picture of a well behaved Saint Bernard (Cleo's bib is useless because she usually manages to flip it over her shoulder and wear it like a Superman cape).  It pays to remember that while Aslan doesn't like to move he also likes to please.  He's watched the battle with Cleo and is determined not to cause trouble.  He knows he is in the kitchen under sufferance and wants to be sure he's invited back.

As you approach Aslan you have one of two choices.  Abandon the whole drinks/snacks program and return to whatever you were doing or step over his bulk.  Graeme doesn't have the same disadvantage as I do and he'd be surprised to know that there are times, after the Cleo/gateway battle that I lose heart and consider abandoning my refreshment plans when I'm faced with Aslan in repose.  This is because the ever helpful Aslan is sometimes inclined to stand up and get out of my way just as I'm stepping over him.   I can barely straddle Aslan at the best of times but on a shiny floor with slippers on I'm in serious danger of bareback riding a Saint Bernard!  If the worst happens and I end up straddling Aslan and trying to keep my balance Aslan, ever helpful, will try to get out of my way.  This often results in me trying to grab hold of any object secure enough to support my weight while I try to untangle myself from the big dog.  Let me just say grabbing such things and door and drawer handles doesn't work - they tend to come with me on my wild ride around the kitchen.

If we've safely arrived at our destination now is no time to rest on our laurels.  The realisation that we have the process to do in reverse while carrying cups or glasses full of liquid is enough to make one jealous of camels.  Once safely in the lounge room once again, drinking our beverages,  we wonder if it had all been worth it.

The puppies might give me some difficult times in summer but our uninvited visitors are giving us even more.  It all comes about because the Galahs are messy eaters.  They have a habit of throwing out any seed they don't like that they find in their feed bins.  This usually consists of wheat seeds.  There are wild Galahs out there who would be glad to have a steady diet of wheat, Hedwig got into her original difficulties when eating wheat dropped on the road by a passing wheat truck, but these two spoiled Galahs turn up their beaks at wheat and sorghum seeds, preferring the oats, sunflower seeds and other, more exotic seeds in the wild bird mix I buy from the pet shop.   Of course, we grow wheat on the farm and it costs us a lot less than the store bought mixed seed that I like to bulk out with our wheat.  Anyway, I've got off track with my grizzle about Galahs who refuse to save us money.  The discarded seed attracts mice.  There's not much we can do about the mice that won't hurt the Galahs as well so we've just had to learn to live with their presence in the aviary.  I think the Galahs keep the numbers down somehow because, while there are a few mouse holes, we aren't overrun with them.

Now for the bigger problem.  The mice (and the water trough in droughts) attract snakes.  The snake that abounds in our area, and sadly abounds in the aviary as well, is the Eastern Brown Snake - a highly venomous and often aggressive representative of the breed.  The Galahs don't like snakes.  They take to the perches highest in the aviary, spread their wings as wide as possible and let loose with a series of ear-shattering screeches reserved only for the sighting of snakes.  The snake, safely ensconced on the ground and believing it is more than a match for a Galah or two, continues its foray into the aviary.  The wing spreading and screeching escalate and this pattern continues until the snake leaves the aviary.  Snakes tend to take their time and poor Hedwig and Hermes get themselves into a real state with beaks chattering and bodies trembling if no-one comes to their rescue.

As soon as I hear the Snake Alarm call I lock up the puppies if they are outside (we don't want them helping me deal with a highly venomous visitor do we?),  don by gumboots, grab my snake deterer and head for the aviary.  Now a word about this snake deterer.  We inherited it with the farm.  The couple who sold us the farm was moving into town and didn't envisage meeting snakes while wandering around their garden so were happy to bequeath us the implement.  The deterer consists of an eight-foot long metal pole with a flat end. When I first saw it propped up against the back of the house I asked what it was for.  When told it was to deal with snakes that got too close to the house I pointed out that the metal pole was nowhere near long enough.  Now back to my trip to the snake-infested aviary.  I'm not scared of snakes as such.  I'm wary of them and sensibly give them a wide berth and live by the leave them alone and they'll leave you alone philosophy, but if one is turning my two Galahs into quivering, screeching bundles of feathers then something has to be done.  I approach cautiously, saying calming things to the Galahs, pointing out that snakes can't climb wire and they are perfectly safe where they are so there's no need for that ear-splitting screech.  Either Hedwig and Hermes don't believe me or they can't hear me over their screeches - I'm inclined to think it's the latter.

Once I've assured myself the snake hasn't moved to outside the cage I pay careful attention to where the two noisy feathered people are looking.  I then move to the opposite end of the aviary and locate the position of the snake on the aviary floor.  I warn Hedwig and Hermes that I'm about to make a big noise, but they are usually too caught up in making their own big noise.  I then whack the snake deterer on the side of the aviary along the wall closest to the snake.  Whacking here brings the vibrations close to the snake.  Snakes don't appreciate that sort of behaviour and quickly plan to leave the hostile environment that has vibrations that put their fangs on edge.  I make sure I'm not in the snake's exit path and once it's left the vicinity I turn my attention to placating two overwrought Galahs.

Soothing words only go so far.  What is called for now is a few long stems of mint plant.  Hedwig and Hermes love mint.  They munch on it with the gusto of a child attacking a lolly.  Once they are munching away at the mint stalks they forget the intruder and all is right with their world again - as long as they don't accidentally spy the hose.  They are usually aware that the hose isn't a snake but after a close encounter with the real thing, they are sometimes a bit twitchy.

These are some of the delights of summer at Spring Rock.  Me? - I'm looking forward to winter when snakes hibernate to some degree. 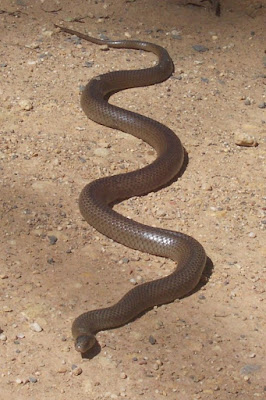