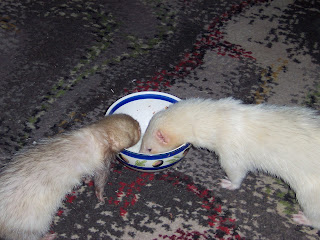 My gorgeous Horton died a week ago.  His death was very peaceful thankfully.  He was very old and just wound down.  As time went on Horton just got slower and slower, slept a lot more and enjoyed more and more cuddles.  He finally passed away in his sleep one night.

Ferrets are very difficult to photograph so sadly I have very few photos of Horton where you can actually see what he looks like.  Most are a blur of white or close up of noses. 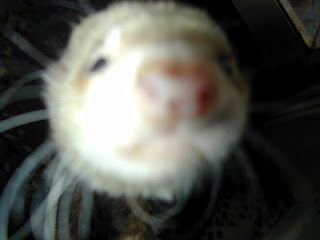 Miette's is the nose in question here, but you get the idea.

I contacted the Ferret Welfare Society of NSW and asked if they had any ferrets available for adoption.  I prefer to buy my ferrets from the FWSNSW because these are rescued ferrets in need of a good home and are already desexed and socialised when you buy them.  The lady to whom I spoke said she only had one pair in need of a home at the moment but they hadn’t been there long and their socialisation training wasn’t complete.  She understood my plight and said as I’d had ferrets before and socialised some as well I could have these two if I liked. The FWSNSW have a full refund policy if you aren't happy with the ferrets you buy but we all know that is of no use to me.  No way could I give an animal back after it's moved into the menagerie.

My daughter Bec picked them up the next day and she, along with her family made a four hour mercy dash to Spring Rock to deliver them the day after that.  Miette was hanging by a thread, with no interest in going on.  Of course Miette did have the reputation of being a drama queen but I didn’t want to take a chance that she wasn’t overreacting this time.  She lay limply in the inside cage, refusing all nourishment and attempts to cheer her up were flatly ignored.  The change is my little old ferret when she was introduced to her new friends was amazing.  She was up and bossing them around in no time flat.

Horton and Ebony arrived with the names Shadow and Fetish.  I already had Shadow the Silky type terrier, so he needed a name change; and I wasn’t going to burden a sweet little girl ferret with the name Fetish for the rest of her life, so they became Horton and Ebony. I think Ebony may have been badly mistreated in her old home because she was terrified of humans.  She played nicely with other ferrets but tended to panic if held by a human.  It took a long time and lots of nipped body parts (mine, not Ebony's) but eventually Ebony learned to love me and trust humans in general. Horton was always the laid back boy.  He and Miette hit it off straight away.  All her plans to rule the ferret world, and I believe, ultimately the whole world, returned as soon as the new ferrets arrived and Miette settled in to ferret domination in no time.  Ebony cow-towed straight away, showing submission and doing whatever Miette told her to do. Horton showed a similar disposition to Albus and simply rolled over and went to sleep if Miette got rambunctious.  Unlike Albus he didn’t roll over on top of Miette so Miette saw that as a definite plus.  A strong friendship was born.

Horton had a great sense of fun and as soon as he was released in the house to play each day, danced about doing the ferret thing and looking for mischief to get into.  Mischief was always available.  He refused to play with Ambrosia the Bengal cat though.  While the other ferrets joyously waged war with Ambrosia, enjoying their skirmishes with gusto and fluffy tails, Horton would just go to ground if Ambrosia pounced on him.  He’d lie there on his tummy biding his time until the cat lost interest in him and then resume his never ending search for shoes to climb into, cupboards to hide things under and sewing items to steal and stash.

His other favourite indoor activity was to challenge me to ferret duels.  This began by him bouncing up to me, all four legs stiff and his mouth wide open.  If I ignored him he’d move a distance away and begin the challenge all over again.  Well, let me tell you, two ferret duel challenges are just too hard to resist.  I’d bend down and try to catch him and the duel was on in earnest.  Horton would race for cover, usually under the sideboard, and pop out from different ends trying to catch me while avoiding being caught himself.  If you can imagine a real life game of whack a mole played horizontally instead of vertically you’ll get some idea of Horton’s duelling technique.  I don’t think I ever won a duel - most likely the reason Horton loved them so much. Ferret duels became a thing of the past recently when Horton felt just too old and tired to challenge me.  He spent his time sitting on my lap and reminiscing about the good old days when he was more than a match for me.

Horton won a special place in my grandson Ethan’s heart.  You see Horton gave the best ferret kisses in the world.  While the newer ferrets, Jocie, Byron and Cecilia were inclined to nip little fingers or noses if held by little boys, Horton would just give gentle, wiskery kisses.  Of course wiskery ferret kisses tickle a lot so Ethan always had his face screwed up like he was being tortured.  Thus no photos are available to commemorate the friendship.  Ethan and Horton had lots of fun and games together and Ethan misses his good friend now.

Goodbye Horton.  Thank you for all the fun, love and cuddles – not to mention those tickly ferret kisses.  You are greatly missed.