An Update On The Menagerie - Phoenix 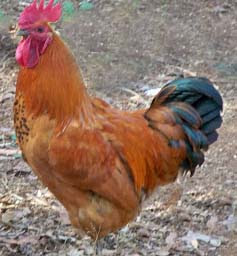 It’s been a while since I’ve written anything so I thought, as my last post was devoted to the oldest member of the menagerie, I’d catch everyone up on the state of the nation at Spring Rock.  All inhabitants are well and happy and most of the furred or feathered varieties are as loony as ever.

Phoenix, my beautiful red rooster, is still ageing disgracefully and spending most of his time in his bachelor quarters trying to entice any hen who wanders close enough to the chicken wire barrier, in there with him.  His strategy is based on the hens’ never ending quest for tasty morsels.  Phoenix struts around his yard making little clucking sounds, picking up imaginary bits of choice food and offers to share with the girls.  He’s been trying this, what can only be called a scam, for quite a while now and the girls now ignore his offers of gourmet worms or seeds, knowing they are empty promises.  Sadly, when Phoenix has his time out in the yard with everyone, even when he genuinely finds some tasty treat, the girls just show him a cold shoulder.

Phoenix has always been of the opinion that the world would be a better, brighter place with fewer roosters in it, himself excepted of course.  With this goal in mind Phoenix has always set about his rooster eradication plan as soon as a new boy comes to stay.  This is one of the reasons Phoenix lives in his bachelor quarters.  The other reason being that when Phoenix shares quarters with chooks 24 hours a day he becomes a most unpleasant fellow, attacking anyone who dares enter the chook yard.  While living in the bachelor quarters, and only spending a few hours a day out in the garden, Phoenix is a pussy cat.  I can pick him up, stroke his wattles and generally have a safe and friendly time with him, unlike if I tried the same thing when he’s in his Mr Hyde mode when living with the girls.  I’m lucky if I escape without bleeding shins after he’s come and me talons first.  Despite this personality flaw I love Phoenix to bits. Phoenix sees me as his girl when he doesn’t have feathery girls, but when he’s with the hens it’s all bets off and he acts as if we’ve never met before.

I know Phoenix sees me as his girl because when I enter his yard he immediately starts his picking up imaginary food routine.  He'll sometimes pick  up a stick and dance up to me and lay it at my feet inviting me to admire it (or possibly eat it - who knows what goes on in that fevered little brain).  After the invisible food or stick offering Phoenix will then do a little dance around me, quietly clucking away and showing off his beautiful plumage.  I then pick him up and sit down with Phoenix on my lap.  This is when the wattle stroking begins.  Phoenix has been known to drop off to blissful sleep during this time, but usually he just sits on my lap and enjoys the wattle massage.

When out and about in the afternoon Phoenix, faced with a bunch of hard hearted chooks who don't believe he has tasty food to offer, had to devise a new “Get A Girl Plan”.  He has perfected his plan over the weeks and now has it down pat.  I let D’Artagnan and nine of the girls out each afternoon after locking up the puppies (George and Emu, the Chinese Silky hens, refuse to leave their little safe house yard so I give them all the scraps and treats to make up for being shut ins).  Phoenix remains in his bachelor quarters until D’Artagnan has a head start away from the chook yard, otherwise Phoenix will pick a fight with the poor fellow as soon as he’s out of my reach.  D’Artagnan is a rooster of peace.  He’s twice Phoenix’s size but prefers to take the pacifists path in life if he possibly can.

Phoenix’s plan is a simple one.  As soon as he is let out of his yard he races out to the garden, looks around for any young ladies separated from the main flock and cuts them from the herd.  Sometimes he has to content himself with just the one straggler, but on other occasions his luck is in and he might get as many as three or four of the girls to himself.  He then has to keep their interest and stop them joining up with D’Artagnan and the rest of the girls and I must admit, this keeps him rather busy, heading off any hen that tries to make a break for the other group, but he seems happy enough with his mini-harem, even if the girls are there by gentle duress.

The rest of the chook yard inhabitants lead relatively quiet, simple lives, lining up at the gate like hungry children in a canteen queue around 3.00 each afternoon.  That is when I usually lock the dogs in the laundry and open the chook yard gate.  Rounding up in the afternoons can be a bit of a trial.  Most come quietly, accepting the inevitability of returning to the safe confines of the yard.  The two Hamburg pullets like to play dumb no matter how many times they are herded towards the open gate.  They manage to veer right or left at the very last minute and head off into the garden again, clucking madly and trying to leave the impression that they thought being locked up of a night was optional, not mandatory.  I patiently round them up and try again and again, my patience admittedly wearing thin at times with threats about feather dusters being made.  I don’t fool them one bit I’m afraid.  They trade on being young and inexperienced and milk it for all it’s worth.

I have to round Phoenix up and put him in his bachelor quarters before D'Artagnan will walk through the gate.  He knows that, should he be foolhardy enough to enter the yard before Phoenix is gaoled once again, Phoenix will go on the attack, and if there's one thing D'Artagnan wants to avoid it's getting into a rooster fight.  Phoenix tends to behave as if he believes he now owns the chook yard and sees no reason why D'Aragnan can't have the bachelor quarters (if I insist that D'Artagnan needs to remain alive).  He, Phoenix, struts around the yard, or if it's near sunset, ensconces himself in the shelter with the girls.  Once I pick Phoenix up and put him in his quarter D'Artagnan strolls into the yard and behaves like he would have walked in earlier, despite Phoenix's presence, but he had pressing business outside.

The other part of locking up the poultry of a night is the drakes Adonis, Ares, Darcy and Beaky (the last drake named by Elliott ages four).  These four boys like to settle down early in the afternoon and find what they consider to be safe hiding place.  This is usually up against a fence where any enterprising fox would have a field day later in the night (can you have a field day at night?).  They usually choose the same hiding spot a few days in a row, but then move on to another secret spot.  This means that more often than not I have to roam around my very large yard calling, "Duck, duck, duck," until I find them.  Usually it's not too difficult because the boys are incapable of no answering me.  They immediately start quacking softly to each other (I think they might be telling each other to say quiet so they aren't discovered) and I track down the source of the quacks.  I then walk them back to the chook yard and nine times out of ten they come quietly.  The tenth time usually ends up with a similar situation as with the Hamburg pullets and I have to try and try again to encourage the suddenly confused drakes through the gate.

Eventually I get all inhabitants of the chook pen into the yard and if things are going well I do a head count that goes something like this, “Three, three, two, one, one, one, four,” and I’m happy (three Faverolle hens, three Sussex hens, two Hamburg pullets, one Bunny (Easter Egger hen), one D’Artagnan, one Phoenix and four drakes.  Graeme is inclined to shake his head at my unusual counting method, but it works for me.