A Tale From My Childhood 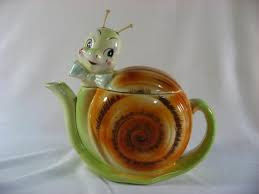 I was admiring my teapot collection with my family when most of them visited on Mothers' Day last Sunday and my newest daughter in law Savannah hadn't met my prize possession in the collection - my snail teapot.  I told her I had a real love of snails when I was young and my mother bought this teapot, a creamer, sugar bowl and salt and pepper set, although only the snail teapot survived. I used to keep snails as "pets", putting grass and leaves in a cardboard box and collecting snails from the ever abundant source of the agapanthas hedge at the side of the house.  I'd often leave the top open so they had plenty of air or close part of the box up, but every morning my pets had scampered back to the agapanthas hoping like anything they'd be undisturbed from now on.  If they had any sense they would have moved to the very back of the plants where my little arms couldn't reach, but who knows if snails have any sense.  Savannah hadn't heard about this childhood love of snails so I realised she wouldn't have heard about my associated childhood sins where snails were concerned.  I thought I'd share the story with you too.

My grandfather was a prisoner of war during World War II and due to poor hygiene at the prison camp, later had to have his legs amputated.  He had one leg for a while and used crutches to get about. Although I was too young to clearly remember him at this stage very vague memories exist, but they are like old silent movie snippets - silent, grainy, short and disjointed.  He lived with us and was a keen gardener as much as his abilities allowed.  One of the things he could do was crush my beloved snails with his crutches.  As I say, I don't remember him or the following story.  I was regaled with it regularly in later years by my mother, who didn't get on well with my grandfather when he lived with us.  I sometimes think she bought the snail set more as a memento of my poor grandfather's torment by a snail loving granddaughter.

As the story goes my grandfather went on one of his snail eradication programs one morning, killing a number of poor innocent snails.  Whether I protested at the time is lost in history, but I can't imagine I just stood there and let it happen.  I was as great an animal lover from early childhood as I am today and I'm sure I would have tried to protect the beleaguered snails.  I do have a very faint memory of standing by my grandfather, who towered over me leaning on his crutches.  My little hands are on my hips and we are in the front yard near the bountiful agapanthus.  I am looking way up at him and having my say as he looks down at me. What was said between us is a mystery, but I was clearly not happy.  As my mother told the story, I was more than not happy and decided to take what revenge I could.

I must have been an enterprising little thing.  While my grandfather was sleeping I sneaked into his bedroom and stole his crutches left lying on the floor in easy reach.  I then hid them somewhere very clever for a small child, because no-one could find them.  I, of course, was the only likely suspect, and caved under interrogation.  The crutches were returned and my grandfather resumed his snail eradication program.

I obviously then settled down to give the problem some thought and the solution I came up with was diabolical.  I imagine my thought process went like this - my grandfather killed snails because he didn't understand what innocent creatures they were, not to mention what great pets they made.  How to get him and snails together on a social basis rather than a murdering one was probably a big stumbling block for me.  My solution?  The story that has come down through history is that I made my usual collection of a box full of snails, marched into my grandfather's bedroom when no-one was looking and filled his bed with snails.  I carefully pulled up the sheets and let things develop on their own accord.

My grandfather's reaction and subsequent retribution against me (and I'm sure there was some punishment attached just as there must have been after the crutches incident), are also lost to history.  My mother tended to gloss over that part of the story.  The punishment must have been effective though.  There are no further stories of my grandfather being harassed by one very small, very determined granddaughter.

Of course, soon after these events, my poor grandfather had his second leg amputated so his snail crushing days were over and I was left to fill my boxes with snails.  They were of course free to return to their lush green home in the agapanthus and make many more little snails for my future enjoyment.

Many years later I discovered my mother in law teaching a very young Rebecca to step on any snail she found.  I protested that we didn't kill snails.  My mother in law looked exasperated and said, "Well someone has to teach her!"  I decided not to argue - my mother in law wasn't the sort of woman where you could win an argument anyway, but once we got home I simply told Rebecca that snails had the right to live to and WE didn't kill snails in our family.  Rebecca nodded wisely and eschewed any further snail carnage.