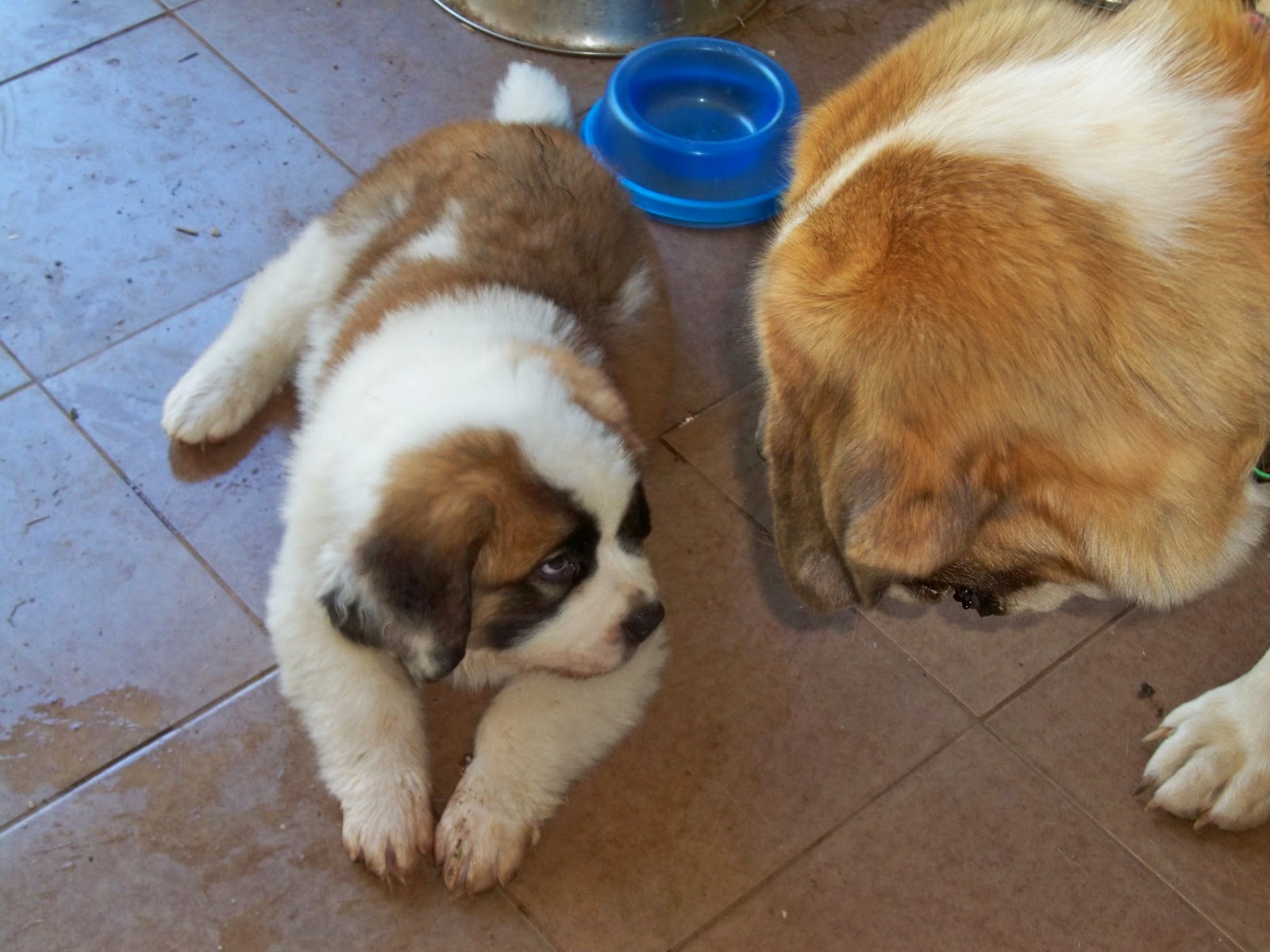 Cleo and Aslan meet for the first time.

Almost two weeks ago we headed for the Goulburn area to meet our new menagerie member and bring him home.  His breeder, Ann, was a lovely lady had travelled down from Queensland by car with three pups to deliver to their new homes.  Ann had developed a nasty cough along the trip, but she spent time to give me lots of good advice in pup raising and showing.  Aslan agreed with all she said, but chose to sit in the shade of the car and snooze in between wise head nodding when Ann said something he wanted to agree with, especially on the use of treats to reinforce wanted behaviour.  We moved inside for a cup of tea and Aslan followed along being told to "follow the feet" by Ann.  It's proved over the last few days that Aslan is very good at "follow the feet", his only hindrance now is Cleo who wants to follow Aslan right on top of him, rather than beside or behind him.  It's difficult to follow human feet if all you can see are giant paws all around you. 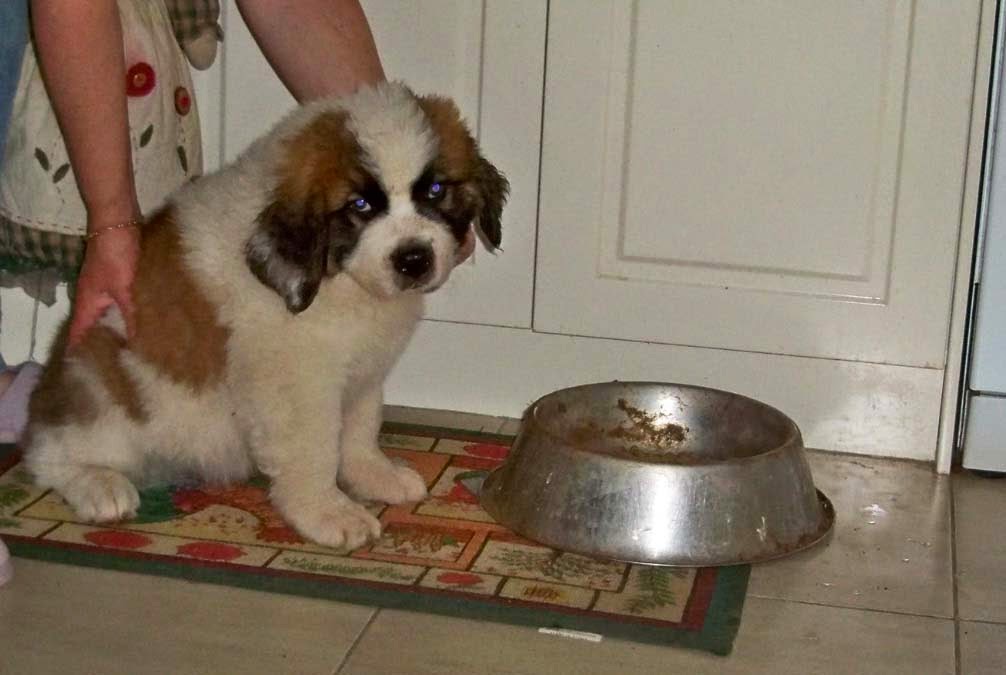 Aslan the day after he arrived home.  Note the feed dish - it's the same one in the photo below. Cleo at the same age as Aslan in the photo above.

The first few days were fraught for Aslan.  Cleo wanted to get to know him from every angle and her nose was always glued to some part of Aslan's anatomy.  The little pup couldn't find relief from the big nose that was constantly questing for more information about this new addition to Cleo's life.  Aslan tried being philosophical about it for a while and we tried to intervene when things got too much for the baby pup but in the end we had to offer him political asylum.  Bringing him inside wasn't a good idea because we didn't want to make Cleo jealous and we wanted them to bond and form a strong friendship.  Graeme came up with the answer.  He brought a fence panel down from the shed and placed it across the laundry door so that Aslan could come and go as he pleased but Cleo couldn't get to him if he wanted a break.  They could still lie close to each other though.  It works like a dream - makes it difficult for us to get in and out of the laundry now, but we are the mere humans in all this bonding and bullying scenario so we don't really count. 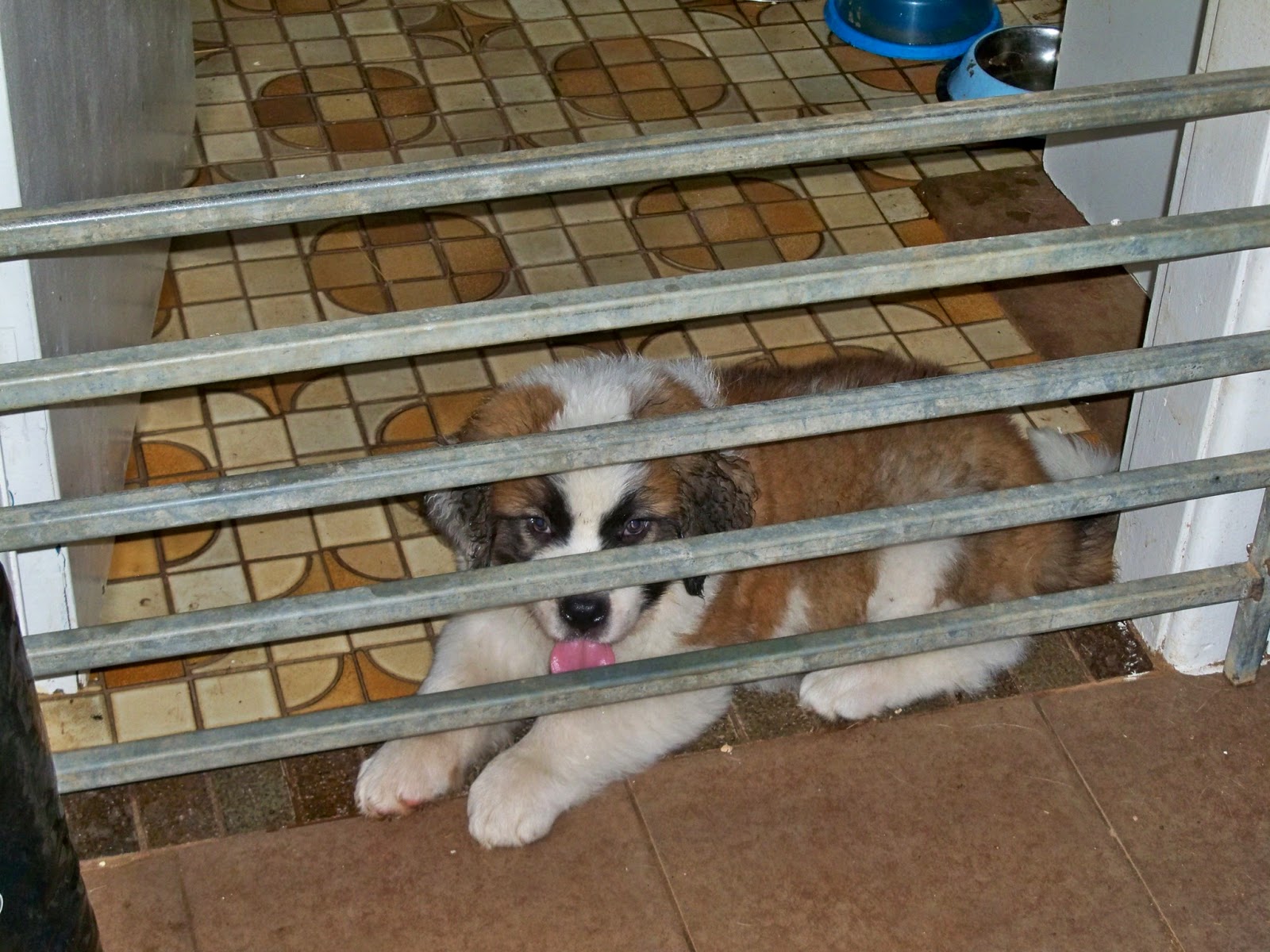 Aslan isn't the only one making major adjustments though.  Cleo is delighted with the newest family member but does allow herself to be bullied out of her food by the little scrap of fluff if I don't intervene.  The feeding regime at the moment is quite involved.  Mornings begin with a drink of lactose free milk for both parties.  Cleo on the back porch and Aslan locked in the laundry so he only gets one share.  Then comes the tinned food.  Aslan had a scoop of tinned puppy food - the very tinned puppy food Cleo refused to eat from the very first offering.  Cleo has half a tin of adult dog food - the very dog food she has scarfed from her early puppy years because she wouldn't eat puppy food.  Cleo now refuses to eat the adult food unless a dollop of Aslan's puppy food is added to her adult food.  She then eats the puppy food first and feels that she's not letting Aslan get something she doesn't have.

Aslan is locked in the laundry with his breakfast for about 15 minutes so that Cleo, a slow eater - she like to savour her meals - can get some food inside her before he comes out and tries to muscle in on Cleo's breakfast.  Once the timer goes off (so poor Aslan isn't forgotten and left in the laundry) I remove Cleo's food, placing it up on the feed bins where Aslan can't reach but Cleo can (but never does - she'll stand and look at her food as if it's on top of the roof rather than nose high).  We then do a tour of the garden so Aslan can practise "follow the feet".  Cleo makes this a complicated procedure because her favourite out in the garden pastime with Aslan is to gently place her nose under Aslan's fat little tummy and flip him over on his back turtle fashion.  A puppy will only suffer this indignity a number of times (quite a number is turns out) before he objects strongly to being flipped over every few steps.  Aslan then voice his disapproval of the game and says it with sharp little teeth as well.  Cleo manages a hurt expression on her face and appeals to me to see the unfairness of it all.  Sadly for Cleo I'm on Aslan's side and end the discussion by picking him up and carrying him back to the house while Cleo follows asking to be picked up too.

Cleo gets a big pat and scruff up and told I still love her too when we get back to the house and both dog lie down for a well earned sleep, waiting for lunch time and the whole feeding procedure (with only the dry food and a chicken leg each this time thankfully) to begin again. 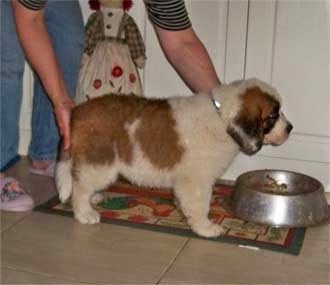 Aslan practising to be a show dog.

After lunch all is relatively quiet.  Cleo and Aslan go out and play, talk to the ferrets, the galahs and the chooks through their cages and generally enjoy the lovely spring weather we've been having.  Around 4.00p.m. life gets more interesting as it's time for me to collect the eggs.  Cleo has always been of the opinion that I am not able to collect eggs without her help.  She waits patiently outside the cage and accepts offers of stale bread if any is available, otherwise she just waits and watches the proceedings, knowing her daily egg will be delivered when we get back to the house.  Aslan likes the more up front and personal approach to the hens.  He trots inside the chook yard as if he owns it and goes straight up to the nearest hen or rooster to introduce himself.  Now when Cleo was a puppy she tried the same thing and got a peck on the nose for her trouble - hence her choice to wait outside the chook yard.  For some reason the chooks are more tolerant of Aslan and give him free reign of the chook yard without interference.  Cleo fusses on the outside of the yard, trying to warn Aslan of impending doom but Aslan wanders around making chooky friends and proving Cleo wrong.  I collect the eggs, give each puppy his or her egg for the day and go inside for a well earned rest.

All is quiet until dinner time about two hours later.  After the dinner ritual is over and Aslan once again freed from his seclusion in the laundry it's play time again for the dogs.  Eventually they come back to the laundry and their beds to settle down for the night. 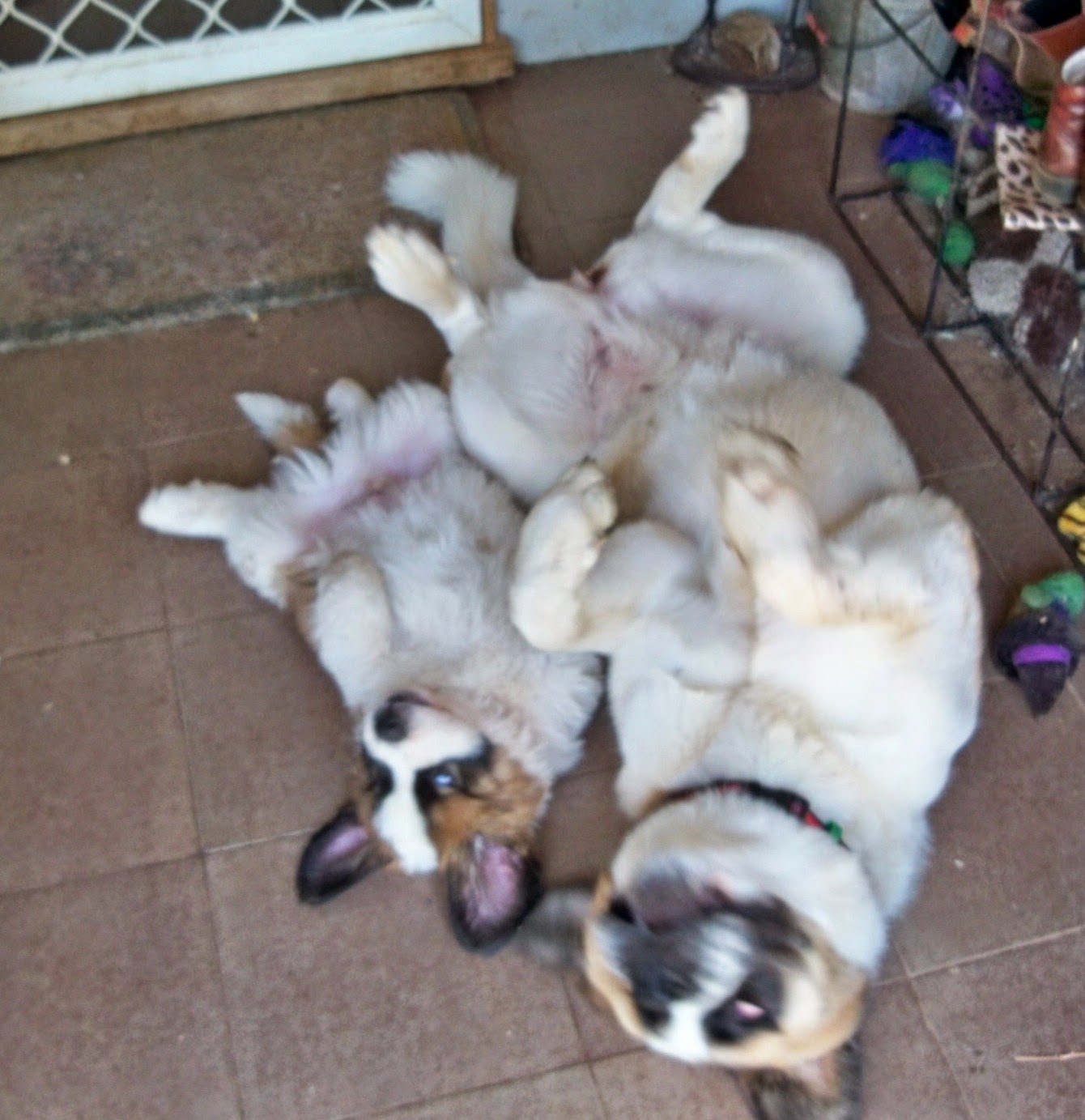 
So the state of the nation at Spring Rock is pretty good.  All members of the menagerie have adjusted to the new addition.  Hopefully they won't notice him growing and growing as the months pass and will still be pro Aslan.  Aslan is learning to live on a farm and ignore any passing sheep if we go for a walk.  Cleo is showing him how - it's hard, but a dog can do it if she or he tries.  Graeme is coping well with the whole second St Bernard situation.   I'm a bit busier than usual and look forward to the day Aslan can have his meals left on the floor to eat when he feels like it rather than these four meals a day.  Cleo is looking forward to this too because she doesn't like having her meals removed after 15 minutes either, but, unlike Cleo, with the easy integration of one fluffy little puppy I'm not complaining about the next few months of complicated feeding regimes.

Welcome to the family Aslan. 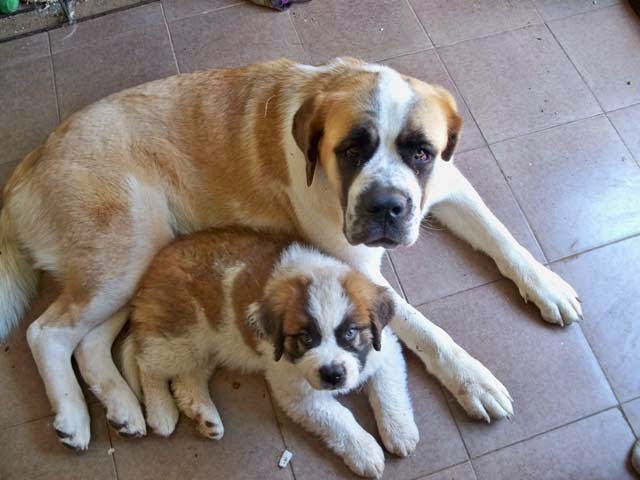