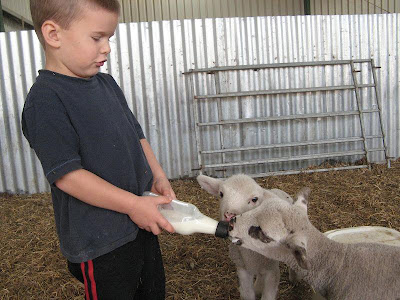 Grandson Michael feeding one of last year's bottle babies
I’ve told you all about ram buying and mating here on Spring Rock, now it’s time to initiate you into the wonderful mysteries of lambing.

After the girls have been mated and are proudly walking around the paddocks displaying their blue bottoms (from the crayon the ram wore on his chest when mating was in full swing) things settle down for a while. The girls are left to their own devices to swap parenting stories, wish they could use their wool to make little sets of four booties, and generally eat for a litter of six or seven rather than the single, twins or triplets they are likely to have. The rams return to their paddocks and I imagine their conversation turns to the girls they me, then later on to the ever important topic of the quality and quantity of food to be found.

So life in the sheep stud is quiet and reflective for a few months. We can now turn our attention to the task of sowing the crops and all its myriad of tasks associated with crop growing. I’d like to say life settles down to a quiet routine, but Graeme and temperamental farm equipment never allow that to happen. Crop sowing has a definite window of time when it has to be completed for maximum benefit to the future of the crops, so sowing time is fraught with stress and worry. Farm equipment that hasn’t been used for a year now shows its true colours. I believe that all the larger equipment spend their downtime wrecking important components of their workings just to spite us for ignoring them for most of the year. Emergency dashes to town and hundreds of phone calls to repair shops with minute description of the symptoms are an integral part of our day. But I digress; we are discussing lambing, not cropping.

A few weeks before the girls are due to pop they are brought into the sheep yards to be injected for various nasty diseases that they and/or their lambs may contract if left unprotected. The ewes are never enthusiastic about this assault on their burgeoning bodies and many loud complaints are bleated and indignant sheepy glares are directed at us. Once the girls are injected and assured of another healthy year of life, they are turned out into a paddock close to the sheep yards so they can be mustered and sorted yet again a few days before they are due. If you have read How To Run A Sheep Stud For Fun And Profit you may remember that we synchronise our joining so all the ewes are due to deliver their cute little bundles within a very hectic, two week period. Before their due date the sheep shed is set up with individual maternity rooms made from steel fencing linked together with tent pegs. Each mother-to-be gets a private room nestled in amongst all the rest. The ewes can chat to each other over their pens and compare notes on the size of their tummies and what sex lamb they are hoping for.

When the big day finally arrives for the first ewe the atmosphere in the shed becomes electric. All the girls realise that a new arrival has put in his or her appearance and they begin to ponder their own offspring’s arrival. Ewe faces take on a serious, getting down to business look and before too long more and more lambs are popping out. The older mothers take this all in their stride. Usually they pop out their twins or triplets, clean them up and go back to the serious business of eating, taking time out occasionally to feed their lambs or chew their cuds with their babies snuggled into their sides. All is at peace in their world.

First time mothers can be a whole different kettle of fish. A number of them have no idea what has happened. It’s not uncommon to see a first time mother looking askance at the slimy little thing that has just appeared in their pen. The ewe may stand up and pop her head over the pen to discuss this strange happening with her next door neighbour. I imagine a conversation something like this:
New Mother: “Hey, look what just moved into my pen! Have you ever seen anything like this before? Is it dangerous? Should I be worried?”
Next Door Neighbour (if she’s an experienced mother): “It’s alright dear, it’s just your baby. Just clean him up and you’ll find a cute little lamb under all that slime.”
New Mother: “Clean him up! How?”
Next Door Neighbour: “ You lick him all over until he is dry and white. It’s not too bad, you’ll get used to it.”
New Mother: !!!!!!!

The conversation is a little different with two first time mothers in adjoining pens:
New Mother: “Hey, look what just moved into my pen! Have you ever seen anything like this before? Is it dangerous? Should I be worried?”
Next Door Neighbour: “Good grief! What is it! I hope it doesn’t come in here!!!”
New Mother: “I know! I know! What am I going to do with it?”
Next Door Neighbour: “I have no idea, but keep it away from me!!”

These mothers usually require a short course in cleaning and caring for their babies. We rub down the baby with a towel and then encourage the mother to join in and help. Sometimes they do sometimes they don’t. The next step is to get the mother to stand still while the lamb tries to drink. New born lambs have a lousy sense of direction and will suck on any part of their mother’s (or anyone else’s close by) anatomy. We usually leave the lamb to its own devises and eventually it locates the teats and with a bit more good luck, the ewe stands still while it drinks. Once again these first time mothers can be a different story entirely. Many of them jump each time the cool little mouth touches their warm udder. They not only jump, but dance around the tiny pen acting as if they have had ice cubes put down their back. The lamb tries to follow and latch on to the teat again but this is a forlorn hope. We often have to intervene and hold the mother still while baby has his first drink.

Then there are the lambs who take their dreadful sense of direction to extremes and no matter how many times you push it in the direction of the teats, it will swerve to the left or the right and try to suck on a leg or their mums’ stomach, or our fingers, or anything things else as long as it’s not the teat. Helping these lambs takes on all the attributes of an all in wrestling match, especially if it’s a first time mother with a baffled lamb. The gentle bonding scene between mother and lamb slowly dissolves into chaos and first lamb, then mother and finally we begin to roll around the less than pristine straw on the floor of the pen trying to attach the lamb’s mouth to the reluctant ewe’s teat. Needless to say we wait quite a while before we decide to intervene. Thankfully, the majority of lambs know what to do and the most efficient ways of doing it.

Occasionally, for one reason of another I end up with a bottle baby or two. Before taking this big step towards drastically reducing my free time, we try to encourage another ewe to adopt the orphan baby. First, we cast our eyes around the likely adopters, looking for a ewe with a kind face (well I look for a ewe with a kind face, Graeme just looks for the closest lambless ewe), amongst those who have recently lambed and either lost their lambs or have a single lamb at foot. After choosing our candidate we then rub the lamb all over the ewe’s back end and the afterbirth if it’s still in her pen (usually it’s not). This messy procedure is to get as much of the ewe’s scent as possible onto the ring-in lamb in order to trick her into believing she had simply misplaced this lamb and it has now come home. Sometimes it works and sometimes it doesn’t. Either way there is usually a performance similar to the one described above of attaching the lamb to the teat.

A problem that rears its head all too often amongst Suffolks and White Suffolks occurs when a confused ewe believes she has lambed simply by watching the ewe next door lamb (oh if only childbirth were that easy). The befuddled ewe is eager for her lamb to get away from the ewe next door and come home where it can be loved properly. The real mother is just as anxious that the lamb stay right where it is. The trouble arises when the mother ewe has twins or triplets. While she is busy giving birth to number two or three, the bewildered ewe next door takes this opportunity to entice the lamb over to her pen with promises of ever flowing milk and lots and lots of love. Lambs don’t care who their real mother is. They are just in it for the milk, so these promises usually work straight away. We have tried to place the bars of the pens close enough together to prevent the lambs escaping, but with little success. Part of our time in the shed is involved with re-introducing lamb and real mother over and over again. Most times the real mother will be quite happy to see her offspring again and give it a quick clean up to remover the foreign smell of Mrs Next-door, but on some occasions the real mother will no longer have anything to do with her lamb. So where’s the problem you ask? Why don’t you just let Mrs Next-door have the lamb and add it to her compliment of babies to be raised that year? Ah, it’s not that simple. There are three ways this situation can go:
1. Mrs Next-door can take the lamb to her heart and love it and her own offspring as well when they arrive shortly after
2. She can take the lamb and love it, but reject her own offspring when they arrive because … I don’t k now - who knows why ewes do the things they do.
3. She can realise her mistake as soon as her own babies arrive and reject the baby she stole.
As you might have guessed, outcomes 2. and 3. are much more common that 1. and the result is another bottle baby or two added to my quota.

Oh the joys of bottle feeding lambs. I’ll tell you all about that some other day when I’m feeling strong enough to relive the experience.
Posted by Rosemary at 8:20 AM 1 comment: