Ambrosia And The Owl


Ambrosia has added drug addiction to her many sins. I don't know if you remember the children's toy that was in the news a while back. It was a set of beads that children could lay out in any shape they liked, spray with water and they stuck together creating a little sculpture made of plastic beads. As it was reported in the media if they were sucked hallucinations were often the result, and as little people tend to like to suck things this was a pretty drastic side effect. The company that sold them recalled all the bad beads and got to work to create a none hallucinogenic bead. When the original beads first came out my granddaughter Hannah was given a set as a gift. She made me a little bead owl for my owl collection. I duly thanked her and admired him as a true work of art. None of us knowing the potential this owl had for causing trouble. Hannah was so proud of herself when she made it for me. It was one of her first works of art with her new toy. She wanted me to keep it after all her other bead creations and the bead set itself had been thrown away. Hannah just gave me a lecture, complete with wagging finger, telling me never, never to suck the owl she'd made for me. I promised faithfully, but sadly Ambrosia has made no such promise.

Ambrosia went through a phase of stealing my owls. Every day I'd find another little owl removed from my collection and secreted somewhere around the house. I haven't found them all yet, but then again I haven't found all my thimbles or other sewing paraphernalia that Ambrosia finds so intriguing yet either. Then one day Ambrosia discovered the little bead owl. Since then she's devoted all her pilfering skills to getting hold of the owl. I've found it in all sorts of weird and wonderful places, usually with Ambrosia curled up asleep beside it. I've tried hiding it, putting it up high and covering it with other owls, but Ambrosia has always managed to find it. I suppose all those hallucinogenic drugs have a distinct smell for cats. Up until now Ambrosia hadn't done anything but pick up the owl and carry it around, just as she picks up my thimbles and carries them around or anything else that fits in her mouth, is portable and catches her eye. Last Monday the owl stealing took a darker turn.

When we arrived home from shopping last week Ambrosia was in the hall, lying down and taking it easy. I had hidden the owl in a tight fitting pot I (that's made to look like a tree trunk) earlier that day. It acts as a nest for Sad Owl, a soft toy and Hannah's favourite owl in my collection. Sad Owl was firmly placed on top of the bead owl. When I went in to investigate, after finding the soggy Beedo owl on the hall carpet with Madam lying prone beside it, Sad Owl had been lifted out and neatly put beside the now empty pot.

I retrieved the bead owl from the floor beside Ambrosia. She opened one eye to watch what I was doing, lifted a paw to stop me and decided that was too much effort. With a sigh Ambrosia resumed her slumber. She eventually recovered to some degree and rocketed around the house for a long while afterwards. No-one was safe. First she'd hurtle towards Nefertiti who was doing her best to keep a low profile and avoid all leopard type cats in the house. The trouble was the house seemed to be filled with leopard type cats. Ambrosia was everywhere at once! After Nefertiti moved to higher ground and pretended to be asleep Ambrosia turned her attention to Graeme and me. We spent quite a while sidestepping Ambrosia as she skidded across the kitchen floor in our general direction, with a startled look on her face. She seemed to have forgotten that if you try and stop on the kitchen vinyl after scooting across it at top speed, stopping is going to take a while to happen. I tried to catch her a few times to calm her down but she was having way too much fun. She'd wriggle out of my arms and race around the house as if it was full of frisky mice. Who knows, after her bead owl sucking, maybe she thought it was.

There were many comments from one member of the family (no names mentioned but you know who I mean) who kept mumbling that she should be put outside until she calmed down. Huh!! Catching her and holding on to her long enough to make it to a door would have been a fine thing. Not that I'd throw my little chemically confused cat outside in her hour of need. It was tempting at times - but no! I wouldn't do it. Eventually Ambrosia wound down. Then she came and cuddled up to me and went to sleep - exhausted after her busy day. I have now hidden the troublesome bead owl inside a cylindrical box with a tight fitting lid and a heavy owl sitting on top. I hope I've finally thwarted Ambrosia's access to drugs.

Now all I have to do is watch Ambrosia for withdrawal symptoms. 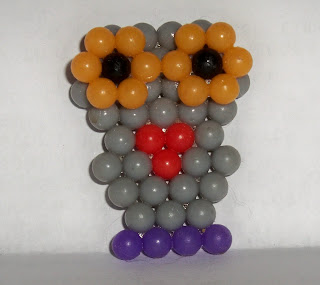 Isn't he beautiful? Who knew the problems he'd cause.
Posted by Rosemary at 6:30 PM 2 comments: