When All Around You Are Holding Their Noses 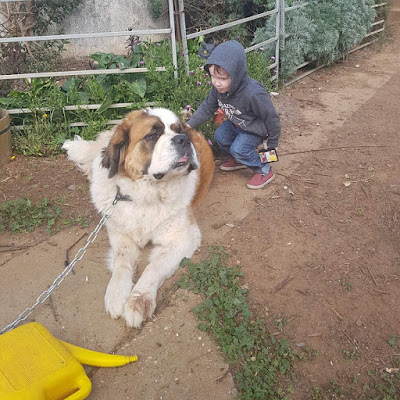 Here I am with the pup Elliott before the dreadful deed.  I never thought he would be involved in such terrible treatment of two innocent dogs.

My day began as usual.  I woke next to Cleo on the laundry floor (my most favourite place in the whole world) and wandered out for a nice breakfast of kibble and a big drink of water.  Cleo went for a morning run around the yard and stopped to say hello to the chooks, who replied very rudely as usual.  I can't be bothered with all that running and investigating.  Lying in the sun, or preferably on my bed in the laundry is my idea of the way to spend my day so I watched Cleo exercise and wagged my tail in encouragement.  Cleo likes encouragement.  Cleo likes attention of almost any sort.

Justin, Savannah and their pup Elliott arrived during the morning.  I'm always glad to see them.  They have three different dog smells on them and I like to catch up on the news of these unknown dogs.  I imagine they are just as interested in Cleo's and my news when the family returns home.  Cleo tends to lose control when we have visitors.  She's very anxious that they love her and her efforts to make sure they know she loves them often results in muddy paw marks on the humans or a lot of drool.  For some reason a lot of humans object to drool  I don't understand why, drool is a fact of life after all.  I have to admit to leaving drool on humans too (as well as on the porch, on the path and anywhere else it happens to drop) but I consider a reasonable amount of drool on a person a sign of affection.  Cleo, I'm afraid to say, goes overboard drool-wise.

Justin has what it takes to make a dog sit up and listen and he can get Cleo's enthusiasm under control with just a word or two.  Cleo always looks rather startled to find she's obeying him but when Justin says sit, Cleo sits.  I must admit I'm very grateful for this.  I tend to find Cleo's over the top energy tiring.  After I've greeted the visitors I usually need a long rest to recover from her exertions.  Today, after my welcome to Elliott and his parents and a bit of drool depositing I was preparing to retire to my laundry when Mum came out and called Cleo and me over to the clothes line.  This was unusual enough to get my attention.  It looked like she had a treat bag in her hand so I wandered over to see what she wanted.  Yep, sure enough, there was a treat bag involved.  I love treats and Mum is usually generous handing them out.  Today was no different and while Cleo and I munched on the tasty morsels things went downhill.  As well as the treats there was also a chain - not a walking lead mind you, a chain!  Well that just never happens to me.  Sometimes Cleo ends up on the chain for bad behaviour, but as I find bad behaviour just too exhausting I have never been put on the chain for such a thing.  It's been a long time and I can't remember why the chain was involved before, but I do get a feeling that it was another lovely warm day like today.

Then the buckets of water arrived along with bottles of smelly stuff.  Justin got a very business like look on his face and his pup sat down beside me and offered comfort (see the photo above).  Now why did I need comfort?  Cleo, also on the chain, said no good could come of this but I pointed out this was our beloved family and Mum was there too and she'd never do anything horrible to us.

I was right.  Mum stood back and watched the whole horrible process.  She didn't get involved at all except to tell us we were good dogs.  Elliott told us we were good dogs too.  Well, I already knew that, what I wanted to know, and vague memories were stirring, was what all this was about?

Cleo was the first to find out.  I heard Mum tell Justin that if Cleo saw me get washed first (washed?) she'd be harder to wash later.  Mum said I was too laid back to get worked up about anything so I'd be fine to wait until Cleo was clean.  I lay on the ground and watched to proceedings trying not to laugh at Cleo's drowned rat look and her new aroma.  Cleo tried to remind Justin and Elliott that they loved her and no-one who loved her would do such dreadful things to her body.  Justin just kept washing until Cleo was as clean and fluffy as a smooth coat Saint Bernard could be (not a patch on we rough coated ones - we take fluffy to a whole new level).  We were on concrete so she couldn't find something smelly to fix the clean smell and she had to sit or console herself with shaking bath water all over Justin and the pup.

Then their attention turned to me.  Uh,oh. I smiled and told them I was fine.  I liked my aged dirt and other interesting smells.  I'd worked all winter on it and it was nearly perfect.  One more dead sheep to roll in and I thought I would achieve perfection.  Justin ignored my logic, and my months of dedicated work and began wetting me down.  The little Elliott got involved too and behaved as if he thought he was giving me a treat.  Speaking of which, it was a while since Mum had dished out the treats when we were tied up so I looked over at her with my most hopeful expression.  She misinterpreted my "where's the treat?" look as she often does and told me it would be alright and I'd be a much more socially acceptable puppy when this was over.  Socially acceptable!  Smelling like flowers and sporting a clean, fluffy coat?  I don't know what social circles she moves in but I felt embarrassed at what Savannah's and Justin's dogs would think of Cleo and me when they sniffed the news this afternoon.  It's a good thing we've never met socially.  I could imagine the jeers should we ever meet.

I didn't struggle of course.  I find struggling exhausting.  You may have noticed from what I've already said that I don't get myself worked up about much.  As a matter of fact I can't think of something that would get me worked up.  It's OK.  I have Cleo for that anyway.  Mum always says thank God I'm bullet proof because she doesn't  think she would survive two Cleos.  Cleo says that I can be boring at times but I don't mind.  I'm happy resting up on my bed or in a sunny or shady spot depending on the weather.   Boring is good.

Once Justin and Elliott thought they'd removed enough of my beautiful smells a thing called conditioner was applied to my long fur and any hope I had of preserving even a tiny bit of my previous aroma vanished.  I was rinsed off again and began to plan just where in the yard I could roll to repair some of the damage.  Sadly Cleo and I were taken to the laundry to dry off so we couldn't find dirt patches to "ruin all our hard work" as Justin and Mum put it.

Cleo and I stayed in the laundry for quite a while.  It takes a long time for Saint Bernard fur to dry it seems.  While we were there we planned the rest of the day.  Most of it involved rolling in dirt and looking forward to walks off the lead when we could find a dead sheep carcass or two.

Until then we will smell of flowers and soap.  We won't be able to hold our heads high until we find those carcasses. 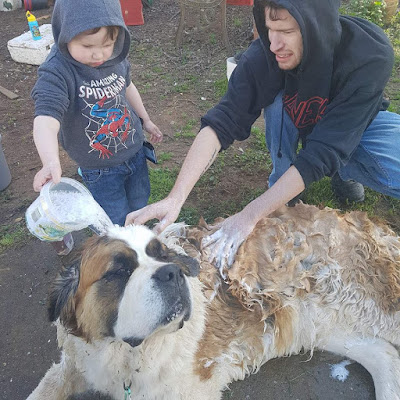 Note my stoic, brave demeanour while the indignities continue.
Posted by Rosemary at 8:33 AM 3 comments: