Aslan At The Vets' 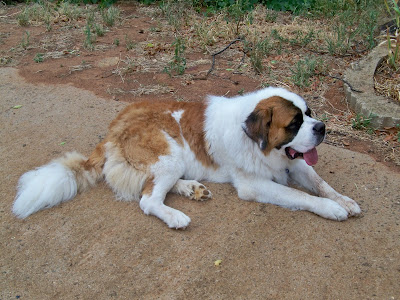 Aslan has been spending some time at the vets' practice lately.  Aslan has bad hips and elbows I'm afraid.  After yesterday's comprehensive X-ray session it can be said, according to his vet, that Aslan has perfect knees,  but the rest?  Not so much.  Initially, Aslan was placed on a combined painkiller and anti-inflammatory medication that made a great difference in his tin soldier, stiff-legged gait.  He responded well and is now moving more like a living dog than a robot and is up and about and generally enjoying life more.  Yesterday's X-rays were to see if there is anything surgical that might help Aslan's situation.  I am hovering between hope that there is and fear of the cost if there is.   Aslan will have to travel to Canberra (a three and a half hour drive from here) to visit an animal orthopaedic specialist for arthroscopic surgery.  We are now awaiting the specialist's opinion of Aslan's X-rays,

A few things have come to light during the recent vet visits.  The first being Aslan's true weight.  Before the recent vet visits I was estimating his weight at around 65kgs, then after our attempt to get him to stand on the scales a few weeks back he was estimated at 75kgs - estimated because Aslan doesn't like the feel of the rubber mat on his delicate toes.  Yesterday he figured out if he sat on the scales it reduced the ratio of rubber/toe contact point and we got an accurate reading of 78kgs.  Aslan doesn't want to talk about it.  He always said no good could come of that rubber covered contraption and really when it comes down to it, there's just more of him to love.  I checked with our vet anyway and he said Aslan isn't overweight, he's just a very big dog.  Aslan heaved a sigh of relief at the verdict and may even get on scales again if required.  He's not promising anything mind you, but he just might.

The other discovery I made yesterday was that Aslan is very nervous around little dogs.  To say he was scared of little dogs is most likely a bit severe.  The last three visits to the vet have revealed that our vet has a lot of little dogs as patients.   Most of these dogs had owners who wanted to meet and talk and/or pat Aslan and while he was more than fine with meeting and being patted by the humans Aslan didn't want the little fluffy creatures anywhere near him.  If they yapped at him, as many did, our ever laid back Aslan dropped to the floor and tried to look invisible while staying as close to my legs as possible, but Aslan thought it was much worse if the little dog was friendly.  As the small fluff ball (they were nearly all of the fluffy small dog variety) approached on the end of its lead Aslan would sidle closer to either Graeme or me for protection. If the little dog kept coming, tail wagging and a friendly look on its face, Aslan would go into a severe panic for Aslan that is.  Severe panic Aslan style is to raise his eyebrows and look around for help.  Most owners by this time got the hint and handed their little dog over to someone else and approached Aslan alone.  At this Aslan perked up and accepted all pats and compliments while ignoring the poor little dog who just wanted to be friends.

It's only little dogs that bring about the timorous side of Aslan.  He was fine with anything Kelpie size or larger.  He didn't meet many Kelpie size or larger dogs but those he did Aslan was happy to touch noses and generally pass the time of day with.  While navigating the small dog shoals Aslan did his best to ignore such thoughtless comments as to how much he ate, the amount of drool generated, the size of his paws and other ill-considered personal observations by his new adoring crowd.  He simply rose above those comments and demonstrated the irrelevance of them by looking gorgeous and relying on me to mop up the drool before more comments were passed.

Aslan's visits to the vets' were reminiscent of Billy's visits long ago.  When I rang to make the first appointment after a two-year gap I told the receptionist my name and that I needed an appointment for Aslan.  "I remember Aslan!" she exclaimed and proceeded to tell me how beautiful she thought him.  When we arrived for our appointment a different receptionist was at the desk.  She looked up, saw Aslan preceding me and said, "They told me Aslan was coming in today!"  After sorting out his appointment and incidental information she then said she was off to tell everyone he was here.  Aslan just soaked up to attention while trying to ignore the miniature poodle growling at him across the waiting room.  After the consultation, which took place outside so the vet could see Aslan move, I returned to the surgery to pay the bill while Graeme and Aslan waited outside.  One of the receptionists who had been lavishing attention on Aslan while he waited his turn to see the vet looked up from her computer and asked if she could help me.  I told her I had left Aslan outside and had come to pay the bill, but before I got it all out, she said, "Oh Aslan, of course.  He's such a gorgeous boy."  I realised that while she'd been patting and loving Aslan she hadn't looked up once to see who was attached to his lead - which really is just how it should be.  There's no way either Graeme or I could compete with the awesomeness of Aslan.

After spending the entire day at the vets' yesterday Aslan was well and truly ready to come home.  He missed his Cleo and didn't like living in a cage.  It was the largest cage the vets had but still, there was little wiggle room for a St Bernard.  Aslan was still groggy but determined to get into the car.  He forgot he can't do that unassisted even when totally in charge of all his faculties.  He approached the car enthusiastically (well, enthusiastically for Aslan) and after a couple of aborted attempts to get his front legs on the tailgate he plopped his head down on it and swiveled his eyes towards Graeme, inviting him to do the rest of the work.  Aslan arrived home to be greeted by a worried Cleo.  She'd missed him too.  He gave her a perfunctory nose bop and tail wag then retired to his bed in the laundry.

This morning he is feeling much better and ready to face the world once again.  All he needs is his morning cheese (with tablets hidden inside where he can't spit them out) and he'll be good to go.
Posted by Rosemary at 7:06 AM 3 comments: