For weeks the back porch has been a place that made me sad.  Whenever I opened the kitchen door and there was no Billy to greet me I felt my loss of him all over again.  It took me  a while to get used to not seeing his gorgeous face around the place but slowly I got used to it.  I still miss him dreadfully, but I don't get a shock when I open the door and he's not there anymore.

Spring Rock has added a new member to the menagerie.  After Billy's death I wrote to a number of St Bernard breeders to ask if there was any possibility of purchasing a pup in my very limited price range.  I told them a little about Billy and my sadness in losing him in an effort to show them any pup who came to live here would have a good and loving home.  Most replies said I had no chance of obtaining a pup at my price.  Two replies from two lovely breeders said the same, but offered me older female dogs they'd kept to breed with when they were old enough at a very reduced price.  I responded to the first offer as soon as I convinced Graeme that what we needed was another St Bernard.  Graeme was quickly getting used to a one (very old) dog situation and I'm sure started to think of the future with no dogs at all.  Graeme didn't take much convincing when I told him the price difference between a pup and the nine month old dog offered to me.The fact that she was an eleven hour drive away from here and that we had only two days we could spare before 2013 to pick her up presented a challenge, but after a marathon drive to South Australia in one day and a second marathon returning home the next, complete with very reluctant dog in the back of the car, Spring Rock once again is home to a St Bernard.

Athena aged six weeks.  She was known as Paris then.  I didn't know here then but these baby photos are too cute not to share.

Athena, then known as Paris,  was less than enthusiastic about accompanying us home.  It took her two owners plus Graeme to get her into our four wheel drive with Athena protesting and resisting all the way.  Once in she cast accusing looks all round and adopted the mien of  a martyr, ignoring my assurances that it would be all right and she was going to be well and truly loved in her new home.  "Sure, sure, sure," I could almost hear her say, "I'm well and truly loved here so why should I sit in this strange car?"  She didn't know what was going to happen but she knew she wasn't going to like it.  Athena stuck to her guns for about half the trip.  She refused to associate with us and took a lot of persuading (in the form of being bodily lifted into the car by Graeme)  to return to the car after comfort stops.  She refused all offers of food and water while every fibre of her being expressed a desire to be returned home.  Then, as we neared Balranald everything changed.  Athena seemed to come to the realisation that we were all she had and if we were all she had then she'd better be our best friend.  Once this decision was made she threw herself into the role of best friend with gusto.  When we stopped for comfort breaks she greeted us at the tail gate with licks and a  wagging tail.  She drank all the water we offered and even tried to eat the treats we offered.  These were new foods to her and she couldn't quite bring herself to eat them, but she took them into her mouth and held on to the pig's trotter or Smackos with good will.  She even co-operated in getting back into the car although this process still required a lot of grunt work on Graeme's behalf. 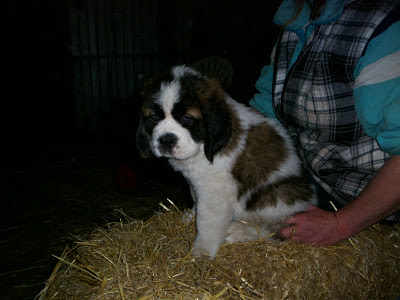 Once home there was little more to do than inspect her new back yard, briefly meet a few members of the menagerie (there was much eye rolling among the established menagerie members at the site of another large drooly dog) and settle down for the night in the laundry.  I expected whining and howling or some other evidence of not wanting to be there but thankfully Athena spent a quiet night sleeping the hours away.

In the morning she threw herself into investigating the house yard anew.  No spot went unsniffed and no menagerie member went unsiffed either, with the exception of the galahs and chooks - they wouldn't present themselves at the cage wall for sniffing.  Athena and Dione, the ancient kelpie, were undecided about being friends at first.  They'd bump noses and both jump back like they'd had an electric shock, but both were happy to express good will towards the other.

Later that day her world started exploding with people.  We celebrated Christmas the weekend before the actual day this year and the family arrived on Friday afternoon and night.  First to arrive were Frances, Joshua and our four granddaughters who, after Hannah's experience with Billy and her gumboots had vowed to keep a close eye on said gumboots this time.  Athena at first wasn't too sure about all these new people, after all she was still getting to know the two tall people who pupnapped her.  The little people gave her the most trouble.  I don't know if she'd encountered children before but while all four granddaughters were prepared to be friends and love Athena, she scampered for the hills whenever they came near.  At one point, three year old Molly came around the corner of the house and nearly bumped into Athena.  Molly yelled in fright and took off to the north, Athena yelped and took off to the south.  After that little incident Athena looked to be permanently terrified of Molly.  Whenever Molly appeared Athena made herself scarce.

Rebecca, Grant and the three boys arrived after midnight when Athena was locked in the laundry, sleeping a peaceful sleep after her hectic first day at Spring Rock, so she didn't get to meet the new lot until Saturday morning.  With lots of reminding the grandchildren that even though Athena was on the huge side she was still a puppy so they had to be quiet and gentle around her and supplying Hannah and Erin with brushes to brush Athena's coat whenever they felt like it, firm friendships with the little people were made.  In the end Athena and Molly even made peace and became good friends.

Saturday night saw two more people arrive with Savannah and Justin arriving for our Christmas dinner.  By this time Athena must have thought that people would just keep arriving every day until the farm was full.  She made friends with the two new arrivals and settled down to trying to get to know 13 new people. She was still in the process of getting everyone sorted out and processed into friends when they started disappearing again.  Saturday night Savannah and Justin gave her a pat got into on of those evil, pupnapping cars, and disappeared.  Sunday morning, Frances, Joshua and the four girls did likewise.  Athena was not sure - no good could ever come of getting into a car.  She concentrated her friendly efforts on the boys only to have them get in the last car and disappear, despite her warnings about what would happen if they sat on those car seats.

Life then settled down to a quiet, regular lifestyle.  The ferrets were traumatised by meeting a St Bernard who didn't want to annihilate them.  Where was the fun in slinging insults at a large drooly dog who just smiled at you and wished you good  morning?  The Gang of Three are still hopeful war will break out between themselves and the large dog, but they aren't really expecting it to happen.

A few lessons needed to be learned.  Lessons such as shoes are not for chewing, neither are buckets or watering cans.  One lesson that Athena found very surprising was that food that is actually in Dione's mouth belongs to Dione.  At first she'd sidle up to Dione and simply pull on the end of the bone or whatever that was hanging out of Dione's mouth and voila!  it was hers now.  Dione would object, but not very strongly.  It was my reaction that brought home the new rule and Dione was then left to full ownership of whatever she had in her mouth.  Food on the ground at Dione's feet was another matter of course.  Their friendship is progressing slowly.  I gave Dione and Athena a marrow bone each one morning.  Dione sensibly took her bone under the apricot tree only to find Athena following her with her own bone.  Athena thought this would be a good time to have a picnic with her new best friend.  It then became a game of follow the leader as Dione tried to find a private and St Bernard free spot to gnaw her bone.  I ended up having to lock Athena and her bone in the laundry so Dione could enjoy her bone in peace.

That was a week ago.  Now Dione is happy to chew her bones in sight of Athena.  Athena has accepted the what's Dione's is Dione's rule and they are becoming good friends.  Athena is proving to a gentle, loving pup and is making inroads into forging a firm friendship with Graeme.  She helps him work on the car, looking over his shoulder and offering to pass him whatever tool can fit in her mouth.  She follows him around the farm and to and from the machinery shed, always happy to receive a pat or just enjoy each others company.  Graeme is adjusting to having a constant doggy companion. Yesterday she learned that the galahs have a very noisy prejudice about St Bernards. She's decided to keep away from them at the moment, but the chooks have no objection to a large brown dog plopping down and passing the time of day with them through the wire so she visits them from time to time.

So as you see,Athena is very happy in her new home, very loved and slightly spoiled - all the things a dog should be. 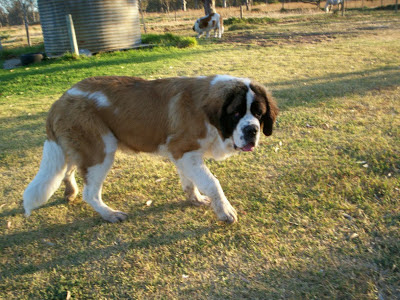 Athena as she looks today.