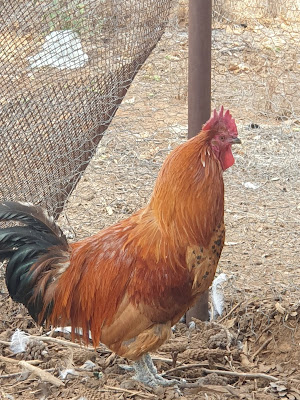 Phoenix in his younger days

My gorgeous rooster, Phoenix, died on Friday.  He was a very old rooster and had started slowing down dramatically over the past few weeks.  Phoenix appears to have died in his sleep peacefully after spending the night snuggled up to George (short for Georgina). Phoenix was the only rooster I’ve ever owned who came when I called him. I miss him dreadfully.

Phoenix came to live amongst the Spring Rock menagerie many years ago.  He was hand raised from an egg by my daughter in law's mother, Casey, and little sister, Ivy, and brother, Jasper.  Phoenix was always just a little bit to big for his boots.  When he was put out into Casey's back yard to live with the resident chooks and roosters, Phoenix saw his opportunity to be top dog (or top rooster I suppose it more apt).  He began lording it over the rest of the chooks and roosters and even turned on his human family, not allowing the children into the back yard to play.  Phoenix challenged everyone who tried to access his kingdom (the aforementioned back yard).  By and large, Phoenix managed to intimidate all comers, with the exception of my son Justin.  Justin had been raised with feisty roosters and knew the trick was to take no guff, firmly putting Phoenix in his place when challenged.  Ivy and Jasper tried to standing up the fluffy tyrant, but caved each time Phoenix ran in their direction.

The day finally came when the children wanted their yard back.  Phoenix had to go.  Despite his bad behaviour, Ivy and Jasper still loved Phoenix and wanted him to go to a good home.  The first name that came to mind when thinking of a good home for a badly behaved rooster was Rosemary.  I was asked if I could provide the good home and of course said yes.  Phoenix arrived in a cardboard box, with his loving family who were all eager to see where Phoenix was going to live.  Phoenix was let loose in the chook yard and immediately set about introducing himself to the ladies, without so much as a backward glance to say goodbye to those dedicated people who raised him.  Casey and the children could see Phoenix would be happy with his new harem and returned home, sad to say goodbye to Phoenix, but happy to have their back yard back.

The first time Graeme and I entered the chook yard after Phoenix's installation, Phoenix tried his domination tactics.  Graeme was the first to meet with the fluffy ball of outrage.  Phoenix came at Graeme talons first with order to leave his domain.  Graeme simply batted Phoenix away, using the flat top of his shoe to send Phoenix a short distance from his legs.  Phoenix found himself too far away from Graeme's shins to do any damage and charged back into the lists.  Once again, Graeme fended him off and Phoenix began to suspect he may have met his match.  I doubt Phoenix would have been surprised if he'd been told that Graeme was closely related to Justin, the only other human he couldn't terrify.  Then it was my turn when I came down to collect the eggs.  After one abject failure to cower the human male member of Spring Rock, Phoenix doubled his efforts to show the human female he was a force with which to be reckoned.  I used the same technique that Graeme had found so successful and Phoenix soon accepted the fact that our presence had to be tolerated in the chook yard.

One thing that Phoenix found in the chook yard that couldn’t be tolerated was Eros, our resident black rooster.  Shortly after Phoenix entered the chook yard, he decided that it would be a better world with less black roosters in it.  Phoenix decided that changes needed to be made and needed to be made now!  He immediately turned his attention to ridding the chook yard of the excess black rooster.  With this thought in mind, Phoenix immediately tried to put an end to Eros.  Eros was a rooster of peace and refused to fight back, but he usually ended up cornered somewhere with Phoenix beating the daylights out of him.  The only solution was for Graeme to build an inner yard in the chook pen and Phoenix was forced to reluctantly retire from the lists and take up residence in his new bachelor's quarters.  Eros once again reigned supreme in the chook yard and Phoenix, while not exactly enjoying living in the bachelor quarters was happy enough.  He was able to chat to the hens through the wire and even share his treats with them when I dished out the scraps each afternoon. 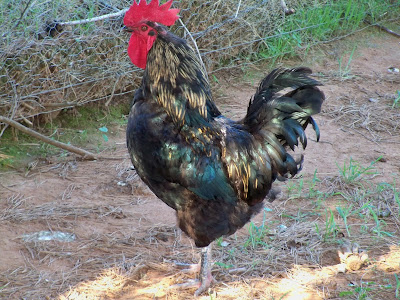 Eros, our rooster of peace.

Phoenix was doomed to live a solitary life, doing his best to entice the hens over to chat with him through the wire.  He pretended to find tasty treats and made little noises of encouragement to lure gullible hens over to the wire.  This worked for a while, but eventually the hens recognised a scam when they saw one and Phoenix only managed to rally the hens to his boundary when I arrived with scraps or treats.  Then he would generously share whatever bounty came his way.  Eventually I decided to let Phoenix out with the rest of the chooks each afternoon so he could socialise and forage.  At first Phoenix’s first stop was to bash up Eros, but after a few interventions by me, where Phoenix was immediately put back into the bachelor quarters, Phoenix learned to ignore Eros’ existence and focus on the hens.

Sadly, his “come and see what tasty morsel I’ve found” no longer worked with the girls, they’d been tricked once too often, so Phoenix had to find a new hen catching strategy.  He accomplished this by the simple expedient of finding a hen or two who had strayed from the flock and herding them to a remote part of the garden where they could all forage far away from any large black roosters that might exist somewhere else in the yard.  This strategy proved to be a full time job, because the hens naturally wanted to re-join the main flock, but Phoenix maintained vigilance and kept the girls he managed to corner with him for the whole afternoon.  This meant he got little else done, including romancing the girls, but Phoenix was happy.

When it was time to round everyone up to lock up for the night, I’d call Phoenix before the herding began.  Phoenix would come running towards me, do his little dance then wait for me to pick him up.  I needed to keep him with me because I’d found that during the chook muster, Phoenix would place himself at the gate to the chook yard and not allow Eros to enter.  Eros would arrive at the gate, see the obnoxious red fellow in residence and think of some task outside the chook yard he had yet to complete, wandering off to accomplish this very important (if imaginary) task.  With Phoenix comfortable nestled in my arms the rest of the feathery population would be easily persuaded to return to their yard.  Phoenix chivvied the slow ones from the comfort of my arms and once again, all chooks and ducks would be safely locked up for the night.  Phoenix would be returned to the bachelor quarters, and if I had time, would get his wattles and comb massaged while we chatted about our days.

As winter approached this year, I began to worry about Phoenix being alone in the cold weather.  I tried swapping Phoenix and D’artagnan (our Faverolle rooster who came to live with us after Eros succumbed to old age), putting D’artagnan (another rooster of peace Phoenix usually bullied at every opportunity) in the bachelor quarters and Phoenix with the girls.  D’artagnan didn’t like this arrangement and nearly damaged himself trying to get back with his girls.  Phoenix, who miraculously had adjusted his attitude to excess roosters, was content to share the yard and sleeping quarters with D’artagnan, so peace reigned supreme in the chook yard during autumn and winter.

As the days passed, I worried that Phoenix, while not objecting to D’artagnan’s existence any more, wasn’t completely happy with the new arrangement.  Having a young, virile rooster in your face in the twilight of your years couldn’t be wonderful.  I hardened my heart to the Shut Ins (George and Emu, my two Silkies who’d had more than enough of roosters and lived in a cloistered yard – yet another inclusion in the chook yard – rooster free) and installed Phoenix in there with them.  George, ever the gentle, quiet girl she is, allowed Phoenix to snuggle up to her on cold nights in the nesting box and thus Phoenix whiled away the last days of his life.  We continued our wattle and comb massaging sessions, right up until Phoenix final day.

Rounding up the hens each night is now a lonely occupation without Phoenix to help.  He brought a lot of happiness into my life as we sat together, me massaging his wattles and comb, Phoenix listening drowsily to my chatter about how beautiful he was.   Phoenix will be greatly missed for a long time to come.

Another wo derful story of life on the farm, Rosemary. RiP Phoenix