We took the puppies and Tristan to the vets' today.  Graeme is still reeling from the bill.  Late last week I noticed an ugly growth on Cleo's side.  It was nestled under her winter coat and I wasn't sure how long she'd had it, so felt the best course of action was a visit to the vet.  Aslan was overdue for his blood and urine tests.  He is supposed to be tested every twelve months, but with Covid making life difficult for everyone, I've let this slip for a while.  Aslan is the picture of health, so I wasn't worried.  Tristan, who is 19 next month, has recently been having seizures.  They have been spaced out over months, and he recovers reasonably quickly after an episode, but I worry.  Therefore, an appointment was made for all three members of the menagerie to visit the vet.

The morning began with me following Aslan around the garden with a honey bucket in hand ready to catch his first dribbles of urine.  I thought it best to arrive at the vets’ with the sample, rather than have them try to get one once we arrived.  I knew from experience that while Aslan is all for socialising with all his fans at the vets’ he is rather shy when it comes to producing samples.  The last time we tried, a vet nurse and I walked Aslan all over the grounds, the vet nurse pointing out favourite toilet spots for other dogs to Aslan while I tried to get him thinking about flowing streams and waterfalls.  Aslan did not co-operate and I had to acquire a sample and bring it back to the vets’ at a later date.

Aslan was not impressed to be accompanied on his early morning toilet break and kept stopping, looking at me as I dived for his nether regions with the little bucket, thinking better of it and moving to a new spot in my very large garden.  Each time he would give me a look that clearly said, "Can I have a little privacy here please?"   Eventually we manage to sync the sample collecting process with an actual sample production and I returned to the house triumphant, little bucket carried ahead of me like a trophy - it doesn't take a lot to make me happy.

The next hurdle to get over was getting the puppies into the car.  Tristan was remarkably easy to pop into the cat carrier.  I relied on stealth and a dozing cat's slower reflexes and picked Tristan up and popped him through the very large top opening of the carrier and job done.  The puppies were another matter.  While both are always eager to get into the car, neither possess the required athletic ability to actually jump up and in.  Cleo's system is to put her chin on the tail gate and give Graeme a sidelong look with a clear "A little help here would be appreciated." message attached.  It's a relatively simple matter for Graeme to then put Cleo's front paws on the tailgate (why she never thinks of this herself I don't know - the chin on the tailgate method so obviously doesn't work) and then lift her back end.  Aslan, who feels that even resting his chin on the tailgate is too much help for Graeme, stands away from the tailgate and looks at Graeme hopefully.  After many aborted attempts and a lot of harsh words about tubs of lard and how useless they are, Graeme calls for my help.  Aslan, realising the big guns have arrived, puts his front paws on the tailgate as soon as I pat it invitingly and then it’s no small matter of Graeme lifting the rest of Aslan’s bulk into the back of the car.

Neither of the two vets who regularly deal with Aslan and his wonky joints was working yesterday, but our vet practice is blessed with many lovely, knowledgeable vets so I wasn't concerned.  With Covid rules in place, we arrived at the vets' car park and I rang the office to say we were here.  The receptionist asked what car we were in and I told her.  Graeme said I should just have mentioned the two big dogs whose heads were now sticking out from the back window.  While we waited, two young girls came over and asked if they could pat the dogs.  Cleo was already trying to introduce herself to these two new, potential friends before they even reached the car, and of course I said they were welcome to pat the puppies.  After following my instructions to let the puppies smell the back of their hands first (the universal way of a dog getting to know you), both girls dived right in and were soon as covered in Saint Bernard hair and drool as Graeme and I were - it's spring and they are shedding like there'll never be another winter.  The two new puppy fans stayed with us for quite a while, patting the puppies and asking questions.

Two vets duly arrived to deal with our mass booking and while Clay concentrated on Aslan, Jen turned her attentions to Cleo.  Tristan made small, complaining noises from his cat carrier on the back seat and was promised attention as soon as the puppies were finished.

While Cleo was being treated in the car park, Clay took Aslan inside to take the blood sample and considering the time he was gone, allow all Aslan’s veterinary staff fan club to greet him and have a chat with the big fluffy fellow.  Clay also took the opportunity to weigh Aslan.  This takes great skill.  Aslan has never been in favour of revealing his true weight and usually approaches the scales in such a manner as to give whoever holds his lead a false sense of security, and then veers off at the last minute.  Last time he was weighed I tricked him into it, walking on the scales myself and quickly hopping off as Aslan followed.  He weighed in at 75kgs last time, and John, Aslan’s personal vet, said that that was an appropriate weight for such a large dog.  I’m afraid John would have been shocked at the tally yesterday, and doubt he would have risen to Aslan’s defence this time.

When Clay returned with Aslan, he asked me if I had any idea how much he weighed.  I replied that no, I didn’t, but I was sure it would be an embarrassing number.  Clay nodded solemnly and told me Aslan broke the vet practice's record for fatness - he weighs 104kg!  Clay told me they have never had a dog reach triple figures before.  Apart from his tubbiness, Aslan is doing well.  The blood and urine tests were all clear, so he can keep taking his medication for his wonky joints.  Short, slow walks are now going to feature heavily in Aslan’s future.  We will be going on these short, slow walks until Aslan manages to shift a lot of that extra weight.  I am working on the premise that he should weigh around 75kg, so he is basically 30kg overweight.  He doesn't get much exercise because his hips and elbows are problematic, but Aslan does enjoy a walk when I take him.  I've been leaving him home because I can't walk as far as I want to with Aslan along, he just can't manage long walks, so from now on the walks will be for Aslan's benefit, not mine.  Cleo will just have to suck it up and accept her long walks around the farm are over for a while.

Cleo’s consultation revealed she has five hotspots on her neck and chest; most of them were hidden by her winter coat.  She also has a yeast infection in her ears, so antibiotics for the hot spots and drops for the ears.  The growth, which was the original reason we took this lot to the vets', is most likely just a cyst, an ugly red/black cyst, but not a problem.  When Cleo goes back for another ear swab to check the infection has cleared up Jen will check the growth again next week, to make sure it’s not growing.

Finally, it was Tristan’s turn.  Jen moved around to the side of the car, after asking all sorts of questions related to an elderly gentleman cat.  She was pleased with most of the answers I gave and worried that the seizures might be related to kidney or liver problems.  Tristan was taken into the surgery for blood and urine tests and a general physical.  I warned Jen that Tristan now feels that old age comes with privileges, one of which is he is entitled to be irascible, growling and sometimes even swiping at a well meaning victim.  Tristan gave Jan his most angelic look, implying it was all hurtful lies aimed at a defenceless old man.   Jen thanked me and told me she always liked to be warned beforehand.

Tristan, determined to get even for being stuffed into a cat carrier and driven miles away from home, behaved like a perfect gentleman.  He won Jan over in a very short space of time and a friendship was born.  He even had blood tests without complaining (at home he growls if you so much as look like you are going to move him off his comfy heat pad), but because his bladder was tiny when Jen palpated it, she decided not to try and get a sample.  Jen gave him a thorough checking over and told me he was in remarkably good health for such an elderly cat.  Jen attributed this to my taking excellent care of him.  Tristan insists it’s all down to the, active, adventurous life he led in his younger day, which toughened him up, and his daily mushed egg in his later years which is the highlight of his sedentary day these days.

I was given a very interesting little pack of pseudo kitty litter and told if, when the blood tests come back, they weren't good, I will need to lock Tristan in a room for a while with the litter box filled with this litter.  It is non-absorbent and I will be able to fill a pipette with Tristan’s urine, for quick delivery to the vets’.  I’m hoping the blood tests all come back with good news, for more than one reason.  I feel I have had far too much to do with my pets urine output over the last few days and would be happy not to have to revisit sample collections for a while.  Tristan now is also on some wonder medication for arthritis.  Jen says it is amazing stuff and really makes a difference to old joints.  She said it isn't available for humans yet sadly, although elderly owners of elderly pets have asked hopefully if it is safe for human consumption.  As I said earlier, Jen complimented me on getting Tristan to one month off 19 years old and still purring, and in such good condition.  Really I haven't done much - apart from getting him a heated pad for winter and preparing that mushed egg for him each day, it's all Tristan's doing.  I do call out the ages of very old cats when I come across one on the internet, and encourage Tristan to aim for that age - maybe it helps.

So, all pets are now confirmed to be either in good health, or are being treated for whatever aliment yesterday’s marathon vet visit revealed.  I just hope Graeme survives the vet bill. 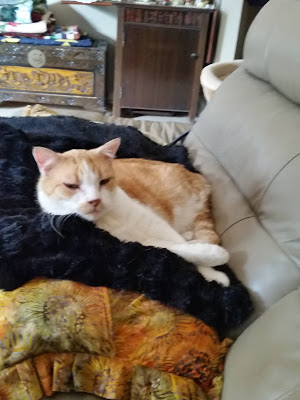 Tristan enjoying his heat pad.
Posted by Rosemary at 11:38 AM

Your en mass visit to the vet made for quite an exciting day all round!