It Must Be The Heat

The weather here is beginning to heat up with temperatures in the high 30's (Celsius for those overseas readers).  The Spring Rock menagerie always seems to go a bit loony as the days warm up.  This year has been no exception.

Venus cannot settle.  She is always on the wrong side of the door, no matter how many times she goes in or out the back door.  As her personal doorman, I just wish she'd make up her mind.  When she's outside, she is tending to stick close to Cleo.  Venus is absolutely besotted with Cleo, and Cleo finds it very embarrassing.  Recently, Venus has taken to bringing little love tokens to her favourite Saint Bernard.  The first one was a dead mouse, which Venus proudly brought up the porch steps and deposited between Cleo's front paws with a very smug expression on her face.  Venus has noticed that despite Cleo’s enormous size, she’s not much of a hunter and clearly needs Venus’ offering of tasty morsels.  I had the privilege of witnessing this gift being delivered.  Venus stood in front of Cleo and waited for the thank you she so obviously deserved.  Cleo, just looked at the mouse, then turned her head to look at me with a what-am-supposed-to-do-with-this look on her face.  I had no advice for her though.

Dead mice gifts to dogs I can cope with (even if Cleo can't), but Venus' next offering was for me and I had to have words with her about it.  When Venus catches something and brings it to the back porch, meowing that special meow cats have when they think they have been particularly clever, I always go and check in case whatever the victim is, it may be something that can be saved.  This time it was still alive, but it was a baby brown snake!  I was barefoot and without any means of scooping it up and removing it without danger to my person.  Venus was sitting next to it, away from the head end, and making sure it didn't escape.  Thankfully, Graeme was outside and was able to safely deal with the "gift".  Venus was disgusted that we didn't appreciate her present and has returned to showering love on the ever-reluctant Cleo.

Hedwig and Hermes have their own snake problems in summer.  The brown snakes find their cage irresistible - either because of their water trough, or to investigate mouse holes.  Hedwig and Hermes screech their, “IT'S-A-SNAKE!” screech and either Graeme or I go out to send the snake on its way.  The last snake to visit was made of sterner stuff than most.  I donned my gumboots, grabbed the snake deterrer and answered the galahs’ call for help.  I found a very large brown snake actually hunting the poor terrified birds.  It was climbing up the sloping branch the galahs use as a perch and road to the aviary floor, and the cage we keep in the aviary for bird transport emergencies, and attempting to reach the galahs who were flapping around inside the aviary in mad panic – they’d never actively been hunted by a snake before.  I banged the outside of the aviary with our snake deterrer (a large metal pole with a flattish end), but that just turned the snake’s attention to me rather than the tasty galahs.  He flattened his neck to threaten me, doing his best cobra impersonation, but I too am made of stern stuff and I continued to bang the outside of the cage.  Eventually the loud noise and vibrations gave the snake a headache and he left the aviary and hopefully vowed never to return.

There’s also been an interesting development in the chook yard.  George, who has just ended her longest ever broody session, has decided that she must have had two very large chickens hatch when she wasn’t looking.  George took to the nesting box about two months ago and sat firm well after the eggs I put under her should have hatched.  I checked her progress every day and George grumped that I was disturbing a very delicate process.  About two weeks after the eggs should have hatched, I removed them and gave George a short lecture on knowing when to give up.  George ignored my advice and continued to sit on her now empty nest for a few more days.  When she finally emerged, she found two very large chickens scratching around the chook yard.  To George it was obvious what had happened - two of her eggs had hatched while she wasn’t looking and the result was before her eyes, scratching around the yard in the care of Emu, our other Silky hen (who just happened to be the hen who actually hatched out those two chickens).

George is very proud of how quickly her chickens grew, but she’s treating them like newly hatched, baby chickens.  She is finding tasty treats for them and calls them over to eat them, she won’t let Cookie and Monster (the two chickens in question) out of her sight and fusses over them non-stop, clucking away in that special cluck mother hens use when talking to their chickens.  Cookie and Monster are a Faverolle, Hamburg cross, which means they will grow into quite large hens.  They are already taller than George, but she knows they are just overgrown babies and need her careful guidance to grow big and healthy. 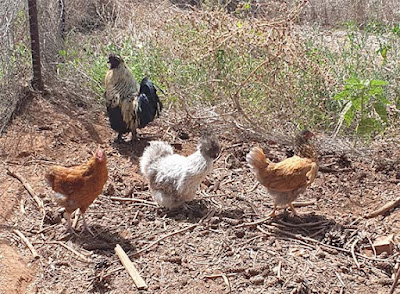 Emu is fine with this.  I think she feels she has put enough effort into raising Cookie and Monster and is now entitled to a rest.  She has handed over full chicken raising responsibility to George, and is once again living the single, carefree life, without so much as a backward glance towards her chickens.

I’m not sure what Cookie and Monster think, but they aren’t knocking back the offer of tasty treats from the slightly deranged Silky with the over the top, fluffy fringe.  I think the two chickens are getting close to the age where mother hens send them out into the world on their own.  Cookie and Monster don't seem to need to know where Emu is any more and seem content (or resigned) to being stalked by George, but then they are being nagged into submission by the deranged Silky, so maybe they are just trying to keep a low profile so George doesn't put them in time out. 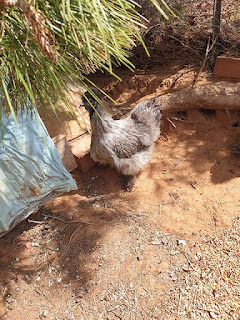 Such a fun and entertaining read again, in your wonderful style, about life on the farm and your pets. As for the snakes, I'm just so happy we dont have any here "a cross the ditch". Merry Christmas Rosemary, to you, Graeme and the mob.

Happy Christmas to you Jenny, from the menagerie and me.